Just over twenty years ago Michael Finch got himself his first job - with the local council - strimming the hedges and borders that surrounded Coventry City's training ground at Ryton on Dunsmore. Many youngsters would have seen this as an ideal way to get close to top class footballers. Not Michael. He just wanted to work outdoors. 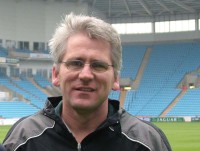 Today he is Grounds Manager at the club's Ricoh Arena, in charge of all he surveys and more.

His delivery is rapid, scarcely pausing for breath. A man who talks with passion about his job, and keeping the fifteen managers he has worked for, happy.

He tried to remember their names and count them on his fingers. Not enough fingers and too many to remember.

He left the job with Rugby Council, joined the football club's payroll and went from the bottom to the top.

"Phil Neal was one of the best. Interesting guy, good to talk to and a good listener" said Michael. His brief pause suggested that he didn't have quite the same rapport with ALL Coventry City's managers in the nineties and beyond, but he's not the sort to say so.

"Managers tend to want to come and tell you 'I want this or that'. Or say 'I don't want that'. In my early days they wanted the pitch rolled and watered. They had no interest in seeding or much else."

"But it's different now. And Chris (Coleman) is terrific. You can talk to him. He has his say, he listens and respects what I think."

Michael Finch looks away. You're left wondering, as he furtively glances at his watch, that his mind is already moving on. As we talked over coffee in a room just off reception at Coventry City's offices Michael was, it's true, a very busy man. At the weekend he had to prepare pitches for not one but two rugby cup semi finals in one day. 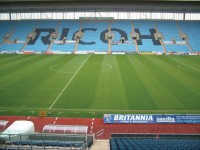 This was the last day he could water the grass.

But, just as quickly his mind was back, the four goal kickers for the EDF Energy semi finals were due to practise. But not until Michael said so, and for only as long as he said they could.

He smiles when I ask him to explain. "Everyone at the club, from the chairman to the staff, have a lot of respect for the pitch and the fact that we try to maintain as high a standard as possible," he explained.

It was said with a smile but you dread to think what the consequences might be for any interloper who might try and get on when either he or his team have their backs turned.

"I'm solely responsible for the pitch's condition so, if there is a problem with the grass, the buck stops with me." He says it with a half smile but there's no doubting the message.

Almost 27,000, thats nearly a full house, packed the Ricoh Arena on Saturday March 28 to watch Gloucester beat Ospreys 17-0 and Cardiff Blues get the better of Northampton 11-5. 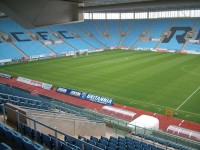 And no more ringing endorsement of Michael and his crew than Shaun Edwards who likened the surface to 'the old Wembley'.

It's not just twenty three Championship matches and a few cup ties thrown in for good measure, to say nothing of the end of season rugby, that now exercises the mind of Grounds Managers like Michael Finch, but also four massive concerts this summer.

The first concert was back in May 2006, early into the stadium's life. It was Bon Jovi ("They were my favourites I have to say") then Rod Stewart, the Red Hot Chilly Peppers and, last year, a second visit from Bon Jovi. This summer, two acts - one night of Oasis and three of the resurgent Take That.

"You're trying to grow grass and all this stuff slows it down because the grass tries to hibernate. They come and build the stage six days beforehand. We put aluminium sheets down to take the weight."

"All the staging weighs between 300 and 420 tonnes. It kills the grass and then we have to grow it back again. So, we are putting a plastic honeycombed membrane down on the pitch for concert visitors, and aluminium under the stage to give it some protection"

When the ground first opened they had less than a week to prepare the pitch for the first game - although they played their first game away which gave ground staff a little more time.

This summer's schedule of concerts means Michael and his staff have to keep 'handing the pitch back'. June and July are testing months before a new season kicks off on the 8th August. 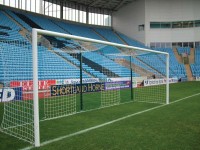 After all these years you might think that every day tending the pitch and keeping everybody happy would become routine. Not a bit of it. The big occasions do get the adrenalin flowing.

"Playing Chelsea in the quarter final of the FA Cup gave me such a buzz. Making sure everything was right. I sat in the stand for a bit and then retreated to my office. I just did some paperwork - but I didn't watch the game. I looked at the grass from time to time, but that's all."

Sunday morning and Michael IS glued to the television - to ITV1's The Championship. But, unlike managers and agents, he doesn't watch the players. He's looking at the grass.

"I never miss it. I look at how certain grounds are coping, those whose grass is good, those whose isn't. Often, on a Monday we (groundsmen) ring each other up and talk about pitches - our own and others."

"But, most of the time, we keep to ourselves - just certain ones you're that friendly with."

In fact, groundsmen from all over the Football League will be heading for Stoke City's Britannia Stadium on April 30 for a seminar, finding out what's new as well as trading ideas and keeping secrets.

Michael shrugs his shoulders in an air of resignation. But he's not complaining. The days when they had a mower or two, rollers and forks are long gone. At this level in soccer it's much more high tech and he laughs when he admits to "constantly asking for new and better equipment". Do they listen to his pleas? "Sometimes, sometimes not."

He's constantly checking there's no disease on his grass, in case it is stressed or suffering from leaf spot which stunts growth - and then there's microscopic worm and heat exhaustion.

New laser guided technology means that marking the pitch out is simpler than it used to be. 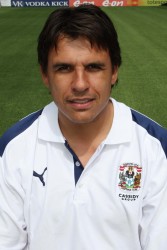 Managers today want to practice more on the pitch itself and yet have more quality in the surface. But you won't hear any complaints from this Grounds Manager.

"Chris Coleman is fantastic to work with and leaves all the pitch-related stuff to me. That's great and how it should be. Makes it so easy."

It is the ultimate labour of love.

And, for those of a certain age and beyond, you might well remember that BBC Match of the Day once made great play when covering a game at Highfield Road that something was different.

Some managers want the grass cut in strips or blocks. But Michael Finch was the man who brought us circles - it was cut in a mesmerising circle after circle, absolutely perfect fanning out from the centre spot.

I had long wondered why ? To distract the opposition in some way, to mark the club out as different - or for the then newly crowned Highfield Road groundsman to stamp his style?

The answer is much simpler. "I got bored one day, that's all."

Michael Finch was off. Two rugby pitches to prepare, four place kickers to supervise and then a week to get the surface 'just so' again for the visit of promotion hopefuls Reading on the 4th April who will, like most visitors, cast covetous eyes over Michael's handiwork.