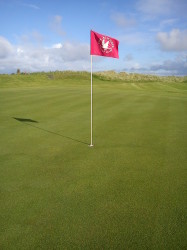 Simon Freeman, course manager of the renowned Isle of Islay links in Scotland - a regular in any top-100 course list of Great Britain and Ireland - explains firsthand why Barenbrug's BAR 22 all-fescue blend has proved the perfect solution for his low-input, low-budget greens.

Looking after this most natural of west coast links brings a unique set of problems for a greenkeeper to deal with.

Firstly, there is no piped irrigation system, so any regime has to rely on traditional greenkeeping methods and promoting the growth of perennial grasses tolerant to relatively long periods of drought. Rootzone analysis has shown that the soil is very alkaline, which of course means that both browntop bent and most cultivars of fescue are always going to be prone to attacks from disease.

The second problem is one of budget - with a small membership and relatively few visitors making the pilgrimage to come and play the course, keeping expenditure at minimal levels is always going to be of paramount importance, regardless of how good the working relationship is between the greenkeeping staff and the incumbent course owner.

After aerating the rootzone with the regular use of a greens vertidrain, we settled on a feeding programme that might be described by most greenkeepers as 'skeletal' (the greens receive around 50 to 60kg nitrogen/hectare annually from an organic mixture of dried blood, hoof and horn, backed up with monthly applications of iron sulphate and Orkney seaweed). The next challenge was to relieve the problems associated with a severely hydrophobic soil with the use of the excellent Tri-Cure wetting agent from Headland Amenity. 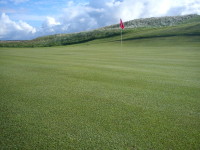 Having overcome these challenges, we began our search for a seed mixture which would thrive under our austere management programme and help improve the putting quality and drought/disease resistance of our surfaces.

Early experiments with traditional fescue-bent mixes were shelved because the bents couldn't keep good health in our alkaline soil with the insufficient nitrogen inputs we were applying. Any attempt to increase fertility also resulted in encroachment from annual meadow grass, which could not be tolerated due to the threat from drought and brutal autumn attacks from fusarium patch and anthracnose. What's more, perseverance with low nitrogen inputs led to nasty instances of take-all patch.

We experimented with various fescue-only mixes over the following three years, with relatively patchy results. Every time we had initial good germination from an overseeding, we found that a number of plants died back within six to eight weeks, as the lack of nutritional input saw the new seedlings wilt during this important phase of their young life.

Kevin Brunton from Greentech Sportsturf in Stirling is a regular visitor to Machrie and, during one of our regular discussions over 18 holes, Kevin suggested I try Barenbrug's then-new hard fescue cultivar, 'Hardtop', in my fairway mixture. This was reported to survive well under conditions where nitrogen input was low, disease and drought resistance was paramount, and a high shoot density was sought, so seemed ideal. 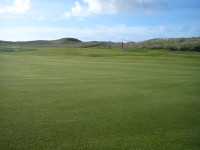 Having used BAR 22 for the past year as our fairway mixture, we'd seen a marked improvement in the number of seedlings surviving through the critical six-to-eight-week period when other cultivars we had used had traditionally suffered. Kevin, our Barenbrug area manager David Greenshields and myself therefore discussed whether it would be possible to use this mixture when overseeding our greens. After all, we never mow our greens below 5mm, and usually stick to a summer cutting height of 5.5mm.

Two years after completing an initial trial, I'm pleased to say that we have considerably improved the putting surfaces at Machrie by using BAR 22 as our overseeding mixture, and would absolutely recommend it to anybody who wishes to integrate new cultivars into a fescue-dominated sward while maintaining low levels of nutrient input.

Following our coldest winter in nearly 50 years, 2010 tested us with the driest spring I have encountered in my 11 seasons at Machrie, during which the greens turned completely brown. Despite these rarely seen and highly entertaining golfing conditions, our surfaces remained extremely true to putt on, and recovered uniformly and instantaneously when the rain came at the beginning of "summer". We have noted a marked improvement in the greens' resistance to red thread and pink patch, which used to blight our attempts to maintain their health through the autumn in the unsuitably alkaline environment. We've also received many compliments from our membership about the quality of the surface and the density of the sward all year round.

Although our greens are undoubtedly slower than many of the links greens that visitors will find on the west coast of Scotland, we believe there will be few that offer such consistency of surface regardless of the weather and the time of year. I'm certainly of the opinion that overseeding with BAR 22 has helped us to improve our putting surfaces annually while still maintaining them with a lean nutritional input and well within our annual budget.