When specialist turf contractor, Kevin Moult, took over the regular maintenance at Donnington Wood Bowling Club in the spring of 2004, he also took over an Allett C-20 interchangeable cartridge head mower that had been used by the organisation previously responsible for the Shropshire club's two Crown Green bowling greens.

Today, Kevin's dedication and attention to detail, assisted in no small way by the mowing, grooming and verti-cutting abilities of his Allett C-20, have raised the standard of the greens to an altogether higher level on which a growing number of bowlers from around the county, and country, want to play.

In 2007, Donnington Wood was selected to host its first Shropshire county match in 40 years, an honour being repeated in 2008. The club's annual Open Competition has also become an important late season fixture over the past three years, attracting first class bowlers from Shropshire, neighbouring counties of England and Wales, and further afield.

Named after the club's treasurer who donated the splendid trophy which accompanies the winner's cheque, the Dickie Bond Donnington Wood Open Finals could not have been staged five years ago, as Mr Bond himself explained: "Quite simply, the greens were not of a sufficiently high standard to attract some of the best players in the county, let alone the rest of England," he said. "The results achieved by Kevin Moult since 2004 are remarkable and I rate him as one of the top greenkeepers in the country."

Kevin Moult's experience in fine turf management began in the early 1980s at Market Drayton Golf Club where he worked for nine years as an assistant greenkeeper. After leaving the club, he continued to expand his knowledge and technical skills while employed to look after private lawns and other areas of ornamental grass.

In 2003, Kevin took the decision to become self-employed, immediately picking up a number of garden maintenance contracts as a result of the fine references generated by his previous employment. It was not until the following year, however, that Kevin secured his first professional contract when he was appointed groundsman at Donnington Wood Bowling Club.

Four years on, his reputation and the results achieved have brought additional maintenance contracts for himself and the Allett C-20 at more than 25 different bowling clubs in Shropshire as well as preparation and renovation work on cricket squares and domestic lawns.

However, his principal contract remains that of Donnington Wood Bowling Club where he can normally be found every Monday, Wednesday and Friday during the growing season as well as at weekends when competitions and matches are being played.

From early April, greens' maintenance at the club involves use of the Allett C-20's verti-cut head every other week, working 1mm below the 5mm cutting height of the mower's 10-bladed cylinder. "I use the verti-cut to generate speed, creating what I can only describe as very fine tramlines in the sward," explained Kevin. "The vertical blades pass through the grasses without touching the soil below, cutting out and helping prevent establishment of hard grasses and thatch."

This year, Kevin is for the first time using a groomer in conjunction with the mower's cutting cylinder. "Since 2004, I have been steadily raising the greens to an ever higher standard," he said. "To help me go just that little bit further, I purchased from Allett last September a powered grooming attachment that is fitted to the mower just in front of the cutting cylinder. Set to work 1mm below the height of cut, the groomer's blades lift and thin the sward, helping the grasses grow back thicker to give a wonderfully smooth and even finish on which to play bowls. The appearance is also fantastic, stopping visitors in their tracks as they enter the club." 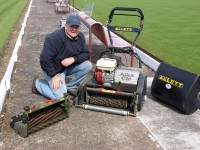 Other work carried out by Kevin once a month on the greens using specialist equipment includes 5mm solid tining to a maximum 100mm depth and a liquid feed. He also uses the C-20's brush cartridge head to remove unwanted debris from within and on top of the sward, leaving the surface in immaculate condition.

"When I started at Donnington Wood, I had never used an Allett machine, let alone worked on a bowling green," commented Kevin. "Three years on, I've learnt a tremendous amount about first-class turf maintenance and Allett mowers. To my mind, the two go hand-in-hand and I would never want to go to work now on a sports turf surface without Allett by my side."