0 Fineturf - a hat-trick of improvements 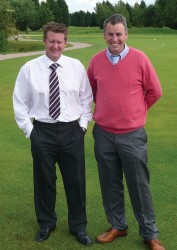 Fineturf, one of the country's leading sports ground contractors, specialise in the construction, maintenance and installation of natural sports turf surfaces. With 16 years experience, Fineturf have successfully completed contracts for golf courses, football and rugby pitches, cricket pitches, bowling greens, race courses and local authorities, both at a local and national level.

A new partnership, formed in 2009 between Fineturf and Lakeland Specialist Earthworks, presented opportunities to expand the national role of the company, to compete for larger more technical earthwork construction contracts. These contracts presented new challenges, especially relating to health and safety.

Following the formation of the partnership, directors Simon Hutton and Wayne Freeman felt a complete review of all health and safety procedures was necessary. The next six months saw a vast amount of review and assessment, with new processes put in place to ensure the correct health, safety, training and up skilling were achieved.

How this was achieved

Firstly, all existing policy documents and procedures were examined to ensure they were up to date and met current legislation. Secondly, an evaluation of employee skills and future training requirements took place.

Anthony Hardy, Operation Manager of Fineturf, shares with us the steps the company went through in terms of improving health and safety, environmental and quality control procedures.

Anthony explains; "It wasn't about training every employee across the board, but looking at present and future contracts and the skill sets and specific training that would be required to maximise our performance."

An employee representative was nominated to work closely with Anthony and the team to identify employee training needs and wishes.

Following the review, and discussions with health and safety representatives, a twelve month programme was established which set the ambitious target to achieve the required health and safety qualifications for 100% of the operational staff.

Through its membership with the British Safety Council, Fineturf took advantage of the free NVQ level 1 health and safety qualification. External training was undertaken and employees were also required to pass the Construction Skills Certification Scheme (CSCS) touch screen test.

Successful completion of the test demonstrates health and safety awareness, with a number of contractors and clients requesting proof of this prior to being eligible to even submit tenders for many larger contracts.

Simon Hutton had identified potential contracts with some of the country's biggest civil engineering construction companies. "It soon became clear that some of our most experienced staff, who had been operating tractors, plant and machinery for over twenty years, would not be allowed on the national sites without the CSCS and Construction Plant Competence Scheme (CPCS) cards" says Simon.

The latter covers the operation of agricultural tractors, and plant and machinery, such as dump trucks, 360 excavators, telehandlers, ride on rollers etc. This ultimately led to additional investment and subsequent CPCS training for a number of employees. 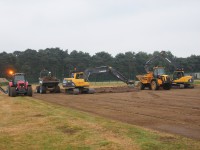 Anthony sourced the help of a Lincolnshire based training provider, Terra Train, and utilised the government's Train to Gain skills programme, which helped part-fund all of the courses taken. Terra Train delivered a number of formal training days, followed by a theory exam and practical operator test.

One nervy moment saw Fineturf operative, Mick Green, receive a visit from a CPCS test auditor during his test. Weak at the knees, he kept his composure and successfully passed. Fineturf now boasts 100% of all operational staff having CSCS Sports Ground Contractor Cards. All staff have undertaken NVQ level 2, with 75% having passed and the remaining 25% due to pass by September 2010. This results in fully experienced operator cards being obtained which are then valid for five years.

In terms of supervisory and management staff, three employees were put through the IOSH Managing Safely Course, which was successfully completed in March 2010.

The four day course covers health and safety management. Both Directors and the Operations Manager have also completed the Site Management Safety Training Scheme (SMSTS) and the Construction Design and Management Regulations 2007 (CDM). All of these awards meet the competency level expected in connection with potential new contracts.

Despite the cost and time investment, Simon has now identified a need for further management investment in terms of the company's health and safety 'Competent Person' becoming GRAD, IOSH and NEBOSH qualified.

Simon states "Fineturf proudly boasts a genuine culture of health, safety and environmental well being and wish to continue this going forward. I have to thank my team for their efforts, which is allowing the company to move forward in these testing times."

Simon was also proud to announce that all the teams effort and hard work had resulted in two new major contracts being awarded, the first for Balfour Beatty Construction Limited. This contract is to construct new sports facilities and playing fields at the new school academy site in Lincoln. We hope to have an article on the progression of this contract in a future issue.

The up-skilling of employees has also created a happier, more fulfilled and, most importantly, a safer workforce. Employees have benefitted from improved remuneration packages and increased job security based around the investment Fineturf and the effort the staff have put in.

Anthony says, "Fineturf were already carrying out a lot of the criteria set out in the ISO accreditation schemes, but needed to evidence and document what we were doing."

Simon also states, "We've been renowned for quality and workmanship for years. However, I realised totally independent assessments of our practices were required to move us forward."

During the winter months, when things were apparently a little slower - Fineturf were working on constructing two new American Football Pitches until Christmas Eve! - Simon asked for a meeting with Anthony and enquired if Fineturf could complete the ISO 9001 within a year? "No problem boss," a somewhat sarcastic Anthony replied; "Let's do ISO9001 and ISO14001 at the same time." "Brilliant," Simon replied, "and I'll give you two days a week in which to collect and collate all the documents and evidence required!"

Both ISO 9001 and ISO 14001 have been achieved this year, running both accreditation process concurrently. Help and support was received by their auditors, the British Assessment Bureau.

Anthony Hardy points out that, whilst the processes involved appear daunting, they are relatively straightforward. He says that the company is more than willing to advise any other contractors wishing to undertake any of the above. For further information or guidance on completing the relevant health and safety qualifications mentioned, then contact Fineturf on 01400 251605 or visit the Fineturf website: www.fine-turf.co.uk