Fineturf began its operations in Carlton Scroop, Grantham in 1995. This was a natural progression for Simon Hutton, company director, from the family run business of Sudbrook Moor Golf Club. At an early age Simon developed his green-keeping skills on the golf course, and due to demands from numerous golf clubs in Lincolnshire he decided to invest in a verti-drain unit. Since 1995 the company has gone from strength to strength and currently employs 10 men who are kept busy all year round. Fineturf now comprises three divisions: Sportsturf Contracting, Turf Production & Installation and Sportsturf Advisory. 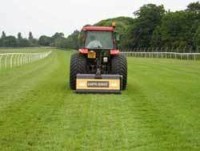 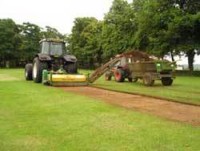 Turf Farm: Established in 1998 to produce custom grown turf so as to maintain high standards of work. Different grades of turf are grown from leading amenity grass varieties. Turf is harvested, supplied and laid as either square metre rolls or as 750 mm wide big roll at a length of 26.75 metres.

Advisory: Advice is completely independent from the contracting business and deals with all matters relating to sound sportsturf management. Technical and scientific support is provided to deal with all agronomic issues and is backed by laboratory testing and analysis.

May 2003 Fineturf were awarded the end of season renovation works at Lincoln City FC: Over the last few years Lincoln City FC had struggled to keep an adequate playing surface throughout the playing season. This was mainly due to overuse and a failing drainage scheme. After an initial inspection of existing drain lines we discovered that the gravel backfill was at varying levels and thus inadequate and more importantly, the gravel was capped by a silty soil.

Commissioning of pipe drains, Each drain line was located, which ran across the width of the pitch and at an approximate spacing of 5 m. Each trench was then cut using appropriate machinery to a depth of 380 mm and 250 mm width. At this depth the existing gravel was located, which overlayed the pipe drains. Excavated soil/rootzone was collected during operation and removed off site.

De-compaction involved using the Earthquake machine in two different directions and to a depth of 200 mm. A verti-drain unit was then run over the pitch, but between the drain lines to a depth of 350 mm. The pitch then received a final grade / stone rake. 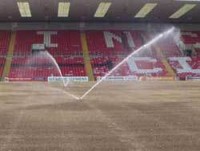 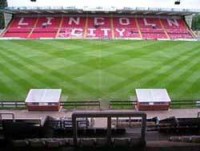 the pitch was seeded using Advanta MM60 applied via the Amazone seeder at a rate of 50 g / m2. Having installed a fully automated irrigation system as part of the project this was programmed to deliver light but frequent cycles during establishment. This promoted germination within four days of sowing.

Eight days after germination the pitch received its first cut using a pedestrian rotary mower. The first cut was made at a height of 25 mm and received a further cut four days later. From this point on all mowing was via a dedicated tri-plex. A well balanced fertilizer (20+5+15) was applied at a rate 35 g / m2 after first cut and then on a 3 week interval until the sward was deemed mature.

The pitch from seed was ready within eight weeks for the first game against Man City. It was then officially handed over by Fineturf to Lincoln City FC.