0 Fineturf on Course, from Tee to Green 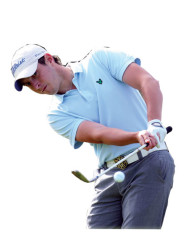 When the pros who are bidding for the Midland Professional Trophy at the De Vere Belton Woods smash a tee shot 300 yards down the fairway they might not pay too much attention to the ground upon which they stand.

As they stroll down the fairway to their ball they might not spend long pondering the verdant carpet of turf under their feet.

And as they crouch to line up their ball on the pristine greens they might only glance at the green baize over which they will send their ball towards the hole.

If they sink the putt, might also offer a slight nod to the green keeping staff for preparing a putting surface that is true and fair.

But the appreciation will be only fleeting as they turn to trudge off to the next tee, fairway and green.

Simon Hutton, however, will look on with beaming admiration as the professionals battle for the Midland Order of Merit title.

Not only is he the proud sponsor of the Midland Professionals Trophy, he has also had a significant hand in the Lakes Course over which the battle is fought.

Hutton, managing director of sponsors Fineturf, holds golf closer to his heart than any other sport.

Despite his company having worked on some of the greatest sporting arenas in the country including Manchester United's hallowed turf at Old Trafford and the Millennium Stadium in Cardiff, golf courses remain his passion.

Golf runs in his blood. His father Tim and brother Ben are both PGA pros at Sudbrook Moor Golf Club.

Dad, a pro of 41 years, started his career as assistant to five-time Ryder Cup Captain, Dai Rees and has played extensively as a tournament player. He was Club Professional at Sleaford Golf Club for 12 years before designing and building Sudbrook Moor and is a Fellow of the PGA.

"Growing up around golf means it is in my heart."

While Simon took a path towards golf course construction Ben, who studied the PGA Diploma and passed his finals in 2002, now divides his time between tournaments and teaching.

The grass is rarely greener on the other side for Hutton. Fineturf - one of the country's leading sports turf contractors, specialising in constructing and maintaining sports turf surfaces - has worked closely with the excellent green staff at Belton Woods.

"We have helped with alterations, drainage, bunkers, tees and greens... anything outside of the ordinary course preparations.

"Angus does an amazing job and it is fantastic to see how the course at Belton Woods has come on with his input."

The man who probably knows more about turf than anyone else on the Midland golf scene is delighted to say that Fineturf has full order books and likes nothing better than getting his teeth into new build and alteration projects.

While there are not many significant new golf courses being built there is always work to be done on changing holes or building new tees and the company's latest acquisition - two specialist diggers - will be in use at least 48 weeks of the year.

Highly successful past and on-going projects throughout the country has elevated Fineturf to becoming one of the country's most sought after sports turf contractor and Simon is always on the look-out for other opportunities. Allowing himself a wry smile when it is suggested that billionaire property developer Donald Trump may even come knocking on his door when he comes to build "the greatest golf course on earth" north of Aberdeen.

"It's a long way from Grantham but who knows?" he said, not dwelling too much on the possibility.

Instead, Hutton prefers to turn his attention to the Midland Professionals Trophy, which as the penultimate tournament in the Midland Order of Merit schedule, sees the race for the title really begin to boil.

"It always seems to provide some excitement," said Hutton. "We have one or two pros in our region that have come up through the junior ranks and it would be nice to see them do well.

"But really I just hope for anything that makes this tournament stand out from the ordinary."