by Terry Inglefield
in Consultancy
on 05 Sep 2008

Since the law (Regulatory Reform (Fire Safety) Order 2005) changed in October 2006 the traditional role of the Fire Brigade has changed and now each business (or organisation) has to have a 'Responsible Person' who is totally accountable for fire safety of the premises.

The Fire Service will now not be doing Fire Safety Inspections - they have a new role as the enforcers of the new law.

After a 30 year career in the fire service Terry Inglefield of STK Associates now carries out Fire Risk Assessments on behalf of Responsible Persons and has recently carried out a Fire Risk Assessment at a golf club, its grounds and out-buildings. He shares with you, in a narrative style from his notes, what he found out around the Greenkeepers areas and what you should be looking for.

"It was a good day and the feelings and vibes I was picking up about the club were good, I asked myself "Would I be happy with my son and daughter being in this building"…yes, on the whole, I would, so this was a good indicator. The people who run the club were extremely keen to manage safety with more than a cursory attitude and their on-site procedures backed this up.

I went outside to the greenkeeper's outbuildings and made a beeline for the heavy equipment areas…heavy machinery, fuel, fertilisers and chemicals well segregated and protected. I make a quick reminder to myself to read the COSSH data sheets in the club office to double check on the possible flammability of some of the chemicals I have not seen before.

Very pleasing to see was the fuel storage; a metal container with double locks, no flammables open, whilst unattended. Maintenance records for machinery are in good order and no obvious combustibles about.

The shed is timber with a wriggly tin roof. Some sheds are of a design with a void underneath which can allow a rubbish fire to go unnoticed, not here though.

At this stage, however, my antennae started to twitch, not because of any shortfall by greenkeeper and staff but on the accessibility for arson. The surrounding area is farmland, no fencing to keep out any dodgy characters and easy escape routes after any misdeeds.

All the quality work of the greenkeeper would be wasted if any local perpetrator decides to set light to it. If the shed catches fire then everything inside will eventually burn or explode. Fortunately there were no tools hanging around that could be used for breaking in. So, all in all, not bad if they can keep it all secure.

Next, I head for the second shed, this is a much better construction, and the fire risk should be lower as all the highly flammable stuff is in the first shed. The only thing that should need my attention is an area used for small machinery maintenance. The other part of this building is an office and a tea room.
Oh dear, I should have known better than to pre-judge any building; what I saw was people who were aware of the fire risk in the first building but pretty oblivious about the risk in their own, familiar, surroundings.

I saw about 10 marker stakes (2" x 2" timber) that had been shaved down to a point at one end to aid fixing, there were shavings all over the place (great to aid the spread fire). The housekeeping was generally poor in the shed with lots of trip hazards about if anybody needed to get out in a rush.

And most of the time these unfortunate events do not line up but, with so many fires I have attended, Murphy's Law comes in to play and, like tumblers in a lock, a fire occurs. Best keep these dangerous ingredients apart.

Murphy's Law took me back to the fire in a house where sunlight had played through the 'bull's-eye' glass in one of the Georgian panes and had subsequently burnt the house down by causing a hot-spot, just like a magnifying glass, on some paper on the coffee table. Yes Murphy's Law, it only has to happen once and it is devastating.

More obvious was the 'Dexion' racking with the line-marking aerosols (expellant in aerosols is usually butane - i.e. extremely explosive and flammable). Next to these was a battery charger in use; the battery and the charger were extremely hot, some heat had radiated to the cans.

Butane (one type of Liquefied Petroleum Gas or LPG) is a vastly underestimated explosive. Experience tells me that a small can of lighter fuel (butane) will blow the doors and windows out of a room. Furthermore, a humble 500g can of fly spray, hair spray or air freshener has enough calorific value to be the equivalent of a 10 tonne lorry hitting that office at 25 mph.

These containers were about 2-3 times the size of your standard can of air freshener. I must make a note to get these moved away into the other shed.
Across the other side of the room are two x 4.5kg LPG containers which should be placed in the caged area outside (this is a good area with proper signage), we can do that now as leaving them means a problem nine times bigger than I explained in the previous paragraph.

On a more minor front, in the rest area was a toaster, microwave, kettle and (all were PAT tested) so probably less likelihood of failure, although some more accumulated rubbish around the place provided trip hazards and combustible materials.

From the furthest corner of the shed, away from the fire exit, there is a 20 metre travel distance for a person to escape. It is not unusual for it to go dark in a fire (especially electrical fires where the fuses might blow). 20 metres is about the limit for travel distances, but the place will need to be tidied up so no trip hazards exist in this situation.

Interestingly, the shed that contained the highest number of hazards (the one with heavy machinery, fertilisers and flammables) turned out to be the lesser risk. Whereas the second shed was a place to relax and do bits of repairs and paperwork, it was also the higher fire risk.

I talked to the greenkeepers generally about fire safety when they are out and about on the course. Normally, they would take a 25 litre jerry can for fuel but had no extinguisher available, especially critical as they often parked in the longer grass (hot exhausts) to keep the fairways clear.

As petroleum spirit has more calorific value than LPG, so I am mentally multiplying, by five, the fire risk of the jerry can compared to th 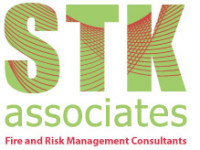 e butane cylinder.
Finally, I asked what the arrangements are for social events on the course, such as charity days, corporate days, club specials etc. At these events additional considerations are needed and a separate Fire Risk Assessment would be needed.

It would need to consider the marquee, its fire escape, is it fire retardant? Are the caterers using LPG, what generators are they using?
None of the above is rocket science but it does require a considered approach as it does not do itself. 'Responsible Persons' will have to live the title bestowed upon them by the new law.

STK Associates are a team of thirty year ex-fire officers who have managed both risks and people, and understand about managing safety and that the job has to still get done. They can be contacted on 01902 824493 or enquiries@stk.org.uk