by External source
in Industry News
on 25 Apr 2017 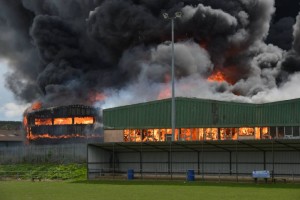 Eight fire engines and an aerial ladder platform have been called to the fire at SIS Pitches at Glasson Industrial Estate.

An SIS spokesman said the fire was in a warehouse and not the main production area. He added it was a "terrible thing".

Police have evacuated nearby offices as they tackle the blaze.

A passer-by said: "It looks as though rolls of artificial turf have gone up in flames and it spread really quickly. The wind has fanned the flames.

"Lots of units nearby are in danger. The heat is unbelievable.

"Fire trucks are having trouble getting to the fire and are looking for a way to get water there."

Smoke from the blaze can be seen in Workington and reports are coming in that it can be seen from Whitehaven.

Schoolchildren at the nearby Grasslot Infant School were sent home at 2.20pm.

Headteacher Karen Loudon said: "Although there was no threat to the school, children were getting upset and, with roads closing, we thought it was wise to close the school."

"Nearby buildings have been or are in the process of being evacuated.

"Members of the public are asked to stay away from the area at this time and those in the Maryport area are asked to keep their windows closed due to the level of smoke."

Cumbria Fire and Rescue Service said: "Eight fire engines and an aerial ladder platform have been called to the scene which is a building fire.

Read the article and see videos from the News & Star HERE