The first host venue of the 2022 FIFA World Cup in Qatar has been completed, five years ahead of the tournament.

The Khalifa International Stadium, first built in 1976, has been extensively renovated and expanded by local architecture firm Dar Al-Handasah to hold 40,000 spectators. It will host matches until the quarter-finals of the 2022 tournament.

The ground has been installed with a technologically advanced cooling system, which the organising committee behind the World Cup claims will keep the pitch at 26°C and the stands at 24-28°C year-round, "while using 40 per cent less energy than traditional cooling methods."

A larger roof has also been added over the entire spectator area, with an intricate net of steel tension cables weighing 4,000 tonnes holding 92 panels in place. 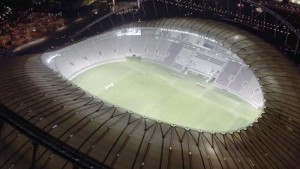 "As we promised in our bid, our innovative stadiums offer an unrivalled experience to fans and players alike," said Hassan Al Thawadi, secretary general of the Supreme Committee for Delivery & Legacy (SC).

"I'm proud we can show these off to the world and welcome fans with the hospitality this World Cup will be remembered for."

The renovated stadium will host its first event tomorrow (19 May); the 2017 Emir Cup final, which is the most prestigious fixture on Qatar's footballing calendar. It will then be used for the 2019 IAAF World Championships in Athletics, before the World Cup kicks off on 21 November 2022.

Hilal Al Kuwari, chair of the Technical Delivery Office at the SC, said: "It will be a proud moment for my team when the first ball is kicked here and I know all of Qatar appreciates the efforts of those who have helped deliver such an impressive venue. 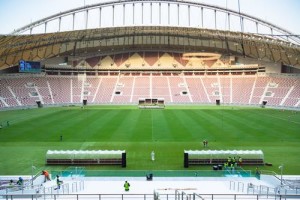 "Fans of all ages and nationalities have a lot to look forward to when they visit the stadium, including the cooling technology we promised during our bid, a pitch that was developed at our one-of-a-kind Turf Nursery, and, of course, an immense atmosphere Arab fans alone are capable of producing."

Seven other World Cup stadiums are currently under construction, and the country's metro network is being upgraded so that journey times between all World Cup stadiums and accommodation locations are below one hour. This will mean fans can watch more than one live match per day for the first time the tournament's history.