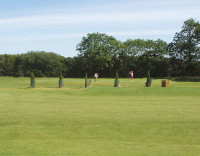 His nine-hole pay-and-play Academy golf course at Towthorpe just outside York opened last year, and is the first ever course to be constructed using Barkoel across most of the playing area.

York Golf Academy has already become a huge hit with people of all ages - including 80 juniors, keen to learn or improve their game. Joining and membership fees are deliberately kept low.

"Our aim is to be the premier golf practice and learning facility in the York area," Graham Chapman explains. "But in order to keep prices down, we have to keep our maintenance costs as low as possible, without compromising the quality of the playing surface or the overall look.

"We can only achieve this by carrying out all the work ourselves, and by using the best low maintenance seed mixture available."

The course was constructed two years ago by Mr Chapman and his two sons, on mainly light land that had previously grown cereals and grass for livestock.

They created features including a large wildlife pond and two raised greens before seeding the entire area with Barenbrug's BAR 40 mixture. As well as Barkoel, this mixture also contains Barcrown, the number one slender creeping red fescue in Europe, and a new drought tolerant hard fescue called Barnova.

The sward was left to establish on its own, with very little inputs and no irrigation.

The resulting fine-leaved sward is dense and very slow growing - reducing the need to mow significantly. During the summer the greens were cut just twice a week down to 5mm. The fairways and roughs were left to grow longer and required even less mowing.

Thatch production has been low so no aeration has been required, and the cultivars have all shown good disease resistance and all-year round colour.

All the maintenance work on the 9-hole course and neighbouring 18-bay golf driving range, which was seeded with a Barcrown mix in 2002, is carried out by one of Graham Chapman's sons.

"The choice of mixture was crucial here, and BAR 40 would not have been the cheapest option. But by investing in quality species and new cultivars, Graham now has a course that will be extremely cheap to maintain, and will keep the area's up and coming golfers happy for many years to come."