Duncan Ross - specialist sportsturf contractors - has completed a project at Wolstanton Golf Club, based just outside Newcastle-under-Lyme, to install the courses' first ever established drainage systems. 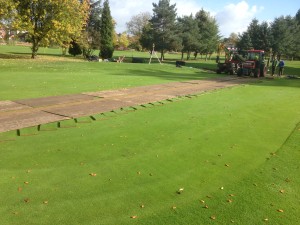 Founded in 1904, the course sits in 130 acres of Old Dimsdale Hall parkland, providing golfers with an 18 hole, 5761-yard challenge that incorporates mature vegetation into the tight layout.

However, the picturesque course had been plagued by flooding on greens 5, 8 and 18 and the decision was taken to install drainage systems, as head green keeper, Andy Brougham explains.

"There was no drainage in any of the greens what so ever," he began.
"We wanted a primary drainage system installed to relieve water from the greens. Without it we knew it would be very difficult to get the volume of water currently holding on the greens to dissipate, through general maintenance alone."

Duncan Ross always take the upmost care when planning projects, ensuring the customers expectations are met, and Andy feels that it was this attention to detail that made the project so successful.

Special consideration began in the excavation process of the drains, when it was decided the work would be done by a trenching machine to reduce any heave in the soil, which could lead to future settlement.

Greens 5, 8 and 18 underwent the same process with the latter two having 80mm outlet drains added as well as the 80mm lateral greens drains, which were applied to all three. The 80mm diameter drains were laid to a suitable fall, approximately 500mm deep and then backfilled with 300mm of consolidated 6mm-2mm stone and topped to turf level with consolidated root zone.

The turf that had been removed at the beginning of the process and preserved for future use was then reapplied at the end of the project to complete the work.

Some of Andy's four staff assisted during the works helping to contribute towards the final result which has completely solved the issue.

"Duncan Ross was very professional, working closely with us from the planning stage all the way through to the very end," he said.

"The project was carried out to schedule and I couldn't be happier with the result.

"From my point of the view the water started pulling through the drains as soon as the work was completed, which is great for us going forward."