Cub Cadet INFINICUT® mowers make it a 'first' for Emerald Headingley Stadium in Leeds. Home to both Rugby Union and Rugby League, the club is currently in the midst of a £41m redevelopment and the INFINICUT® purchase is a 'first' for a rugby club in the UK. However, these aren't the only new additions for Head Groundsman Ryan Golding to contend with as the redevelopment includes two new stands. 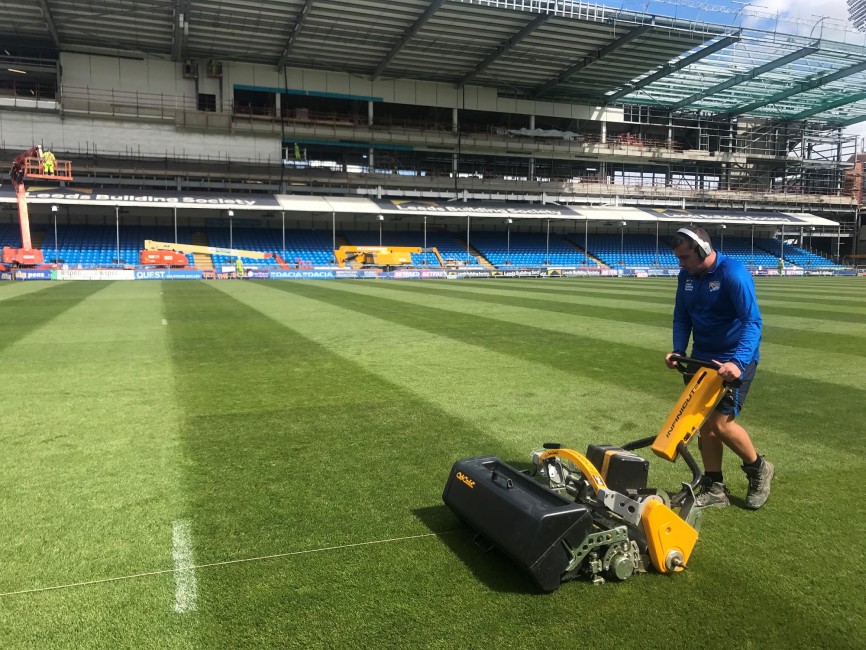 "Myself, and my team of three, have our work cut out with a busy schedule of play as we're home to both Leeds Rhinos rugby league, and Yorkshire Carnegie rugby union clubs. On top of multi-use rugby, we also host academy games, externals events, training and more" explains Ryan, who has been at Headingley for 15 years. While the facility is happy to invest where it's considered to be required, when it comes to new machinery, Ryan must justify a solid business case.

"Our previous mowers were starting to cause us a lot of problems, so we looked at some alternatives. I've demonstrated the INFINICUT® previously and had been impressed with it, and after a few conversations with Vinny Tarbox of MTD, it was evident the mowers could make a big difference to the quality of our playing surface. The fact the INFINICUT®'s can be powered electrically went a long way in making a viable case. The reduced noise, as well as emissions, it produces have meant that despite our inner-city location, we have been able to mow earlier in the mornings and therefore cope better with the recent hot conditions."

Following their delivery in June 2018, the mowers are in use three to four times a week, including in the build-up to games, thanks to the cleanliness of cut and quality of finish they produce. With the work ongoing and play continuing throughout, Ryan's favourite feature however, is something else! "It's the simplest of things but the Cub Cadets have quick-release, demountable wheels which are a god send when transporting the mowers 300yards from our stores to the pitch. Now, even navigating through a building site, has not been a problem."

In the space of just a few weeks, Ryan is already impressed with the benefits the INFINICUT®'s have delivered. "Presentation and quality of cut have improved, with the back-up from Vinny and Jonty great too. The lads have liked the mowers ever since they tried them on demo, so together we're all delighted with our decision."