0 First hole in one at RJ National 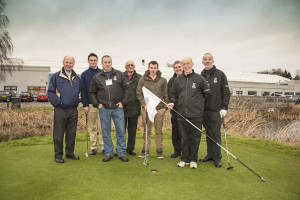 Ipswich, Suffolk (April 15, 2013) Craig Cameron, Deputy Course Manager at Aldeburgh Golf Club, is the first person to record a hole-in-one at the RJ National, Ransomes Jacobsen's three-hole golf course, located at their European headquarters on the outskirts of Ipswich.

Playing the final hole on the par 9 course, following a factory visit by the Aldeburgh greenkeeping team, his tee shot bounced once on the green before nestling in the cup, placed awkwardly at the back of the green.

"I was absolutely amazed and stunned," Craig said. "I knew it had a chance when I hit it, but the third green is so small, virtually surrounded by water and on the day the pin was well to the back, so stopping the ball was very difficult; you just have to ask my colleagues who all put a few in the lake!"

Following Craig's remarkable achievement, Ransomes Jacobsen had a commemorative trophy made and Richard Comely, the company's Director of Marketing and Product Management, made the short journey to Aldeburgh to present with the memento. 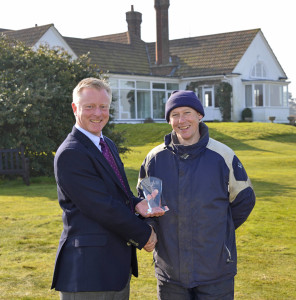 About the RJ National
The RJ National is a three-hole golf course, situated at the Ransomes Jacobsen manufacturing facility in an industrial park on the outskirts of Ipswich. It was constructed on a piece of waste heathland and has introduced an area of biodiversity into the industrialised area. Surprisingly, it was the first golf course in the UK to be awarded the Golf Environment Organisation's (GEO) certification for environmental best practice. The three greens haave all been constructed with different grass types which enables the company to test the commercial mowers manufactured at the facility. It was officially opened in 2008 by the then Mayor of Ipswich, Cllr David Hale.

About Textron Inc.
Textron Inc. is a multi-industry company that leverages its global network of aircraft, defence, industrial and finance businesses to provide customers with innovative solutions and services. Textron is known around the world for its powerful brands such as Bell Helicopter, Cessna Aircraft Company, Jacobsen, Kautex, Lycoming, E-Z-GO, Greenlee, and Textron Systems. For more information visit: www.textron.com.

Craig Cameron (holding flag) following his hole-in-one on the RJ National, with other members of the Aldeburgh greenkeeping team, Nigel Church of Ransomes Jacobsen and Adrian Kersey of Bartram Mowers