0 First impressions count at The Leys 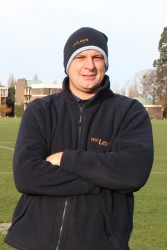 I first met Matt Pullen five years ago at Whitgift School in Croydon, when I was judging him for the Cricket Groundsman of the Year competition Since then, Matt has moved on to become Head Groundsman at The Leys, an independent school in Cambridge.

I arrived at 10.30am just as the staff were enjoying their mid-morning brew. Matt introduced me to the rest of his team.

The school has a reputation for looking after its staff, with Matt's assistants, Danny Church, and Mal Lawton, both having completed over twenty years service. Matt is only the fourth head groundsman to take up the post since the 1950s. Gardener, Shaun Mahoney, and apprentice, Ashley Shipp, complete the grounds team.

The school was founded in 1875, at a time when a large number were being founded by the Methodist Church. Whilst there were already several leading schools providing an education for the sons of ministers, Methodists were asking for schools for the sons of lay members.

The Methodist Conference set up a committee to look at the possibility of starting a school at Oxford or Cambridge. Following several visits to Cambridge, a twenty acre site was discovered for sale - The Leys Estate.

The Reverend Doctor W.F. Moulton, secretary of the committee, was asked to become headmaster of the new school and The Leys formally opened its doors on 16th February 1875, with sixteen boys from English Methodist families. Within two years, this number had grown to one hundred.

Since that time, The Leys has expanded significantly. Today the school is an independent, fully co-educational boarding and day school with over 530 pupils from all walks of life.

Both The Leys and St Faith's use the sportsfields on a daily basis. Sport is an important part of the curriculum with the school continuing to improves its facilities. Since Matt's appointment, two new sand dressed full size artificial pitches have been installed.

Since its foundation, the school has acquired additional land and is now set in fifty acres near the centre of Cambridge. The sportsgrounds are divided into two sites - Main Campus and Latham Road - with pupils having to walk to the Latham Road sports pitches. There is also a superb sports complex on campus, including a sports hall, gym, squash courts, aerobics studio, floodlit astro-turf hockey pitch, a 25m swimming pool, three natural grass tennis courts, three tarmac tennis courts, netball and basketball courts.

The school's main cricket square is located on the Main campus and, during the winter months, the outfield doubles up for the senior rugby pitch. These facilities are available for hire when not being used by the school.

After our brew, we all walked out to the senior rugby pitch to get a team picture of all the staff alongside their trusty old grey Fergie tractor, which has been in use since the 1950s.

Like all independent schools, the condition of their grounds is paramount; first impressions of the school are often formed by the presentation of the grounds. On a mild November day, they were very tidy and well planted out with a variety of plants offering plenty of shape, form and colour.

Shaun Mahoney is the school gardener responsible for maintaining all the gardens, shrubberies and flower beds, Shaun used to grow a lot of the summer and winter bedding plants in the greenhouse. However, it was rather time consuming so, under the new regime, he now buys ready grown plants for tubs, troughs and bedding schemes. He still uses the greenhouse for making up their own hanging baskets.

The sports pitches were well laid out and presented. The senior rugby team pitches commanded pride of place on the cricket outfield. Grass is mown using rotary mowers set at 75mm, however, they have not had to mow the pitches for some time due the dry weather the east of England has been experiencing.

One of the first things Matt did on taking up his role was to review the working conditions and equipment the school had, as he believes that providing a good working environment is very important.

So, one of the first tasks completed was improving the mess room facilities for his staff. They have moved into larger accommodation, releasing much more valuable space for equipment and materials. Matt has also overhauled the machine sheds, tidying them up and beginning a programme of replacing old and worn out tools and machinery.

The school has invested in new mowers; a Jacobsen TR3 triple mower to replace the old trailed gang units, along with two new Protea wicket mowers for maintaining the squares.

All the staff gets free meals, PPE and quality outdoor clothing. Working hours are set at 8.30am-5.00pm, with some paid overtime as required.

The main cricket square has sixteen pitches, all being dressed with Ongar loam. The pitches perform reasonably well considering there is only 45-50mm depth over the indigenous soil. This was confirmed when we took some cores from the square. In both of the samples there was a distinct root break below the thatch layer.

Matt was also keen to point out that, since he took over, they have changed the method of end of season renovations, now using the Graden scarifier, contracted out 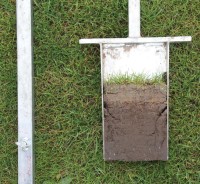 to Turfcare Leisure Services, to ensure the three squares are thoroughly cleaned out. Each square is then topdressed using between 10-13 bags of Ongar loam per pitch, with the aim of building up the amount of loam. They are then overseeded with 100% rye grass mix, fed and aerated later in the autumn.

Although the wickets have improved over the last four years, the core sample clearly shows there is a need to reconstruct some of the wickets in the coming years if they want to improve their performance. Matt explains that, ideally, they need to be dug out to a minimum depth of 100mm and refilled with new loam material; not really an expensive job in the scheme of things, if you are prepared to do the work yourself.

Based on today's loam prices at around £100 per tonne, Matt reckons he will need ten tonnes of loam (2.5 tonne per every 25mm excavated) to rebuild a complete pitch, stump to stump, ten feet wide. That's an investment of £1000 per pitch. Yes, there's labour required, and the hire of machinery, but Matt believes that the long term benefits outweigh the overall cost.

Matt will endeavour to continue to improve all the squares with better maintenance regimes but, having seen the cores, he knows only too well the only real option is to dig up and reconstruct these pitches in the coming years.

Core samples were also taken from the grass tennis courts. A much relieved Matt was pleased with what he found; the sample showed good rooting depth below 200mm, no black layer and consistent loam topdressings with no root breaks. The tennis courts are very popular in the summer and get plenty of play.

Renovations on the grass courts are similar to the work on the cricket square. They are gradened in one direction, topdressed, applying about five tonnes of loam on all three courts, and oversown.

The courts are mown on a regular basis to maintain playing height and help present them in a professional way. They are fed with appropriate granular feeds - generally something like 12:0:9 summer and 4:0:10 winter NPK - to maintain vigour and colour. All court lines are marked with a transfer wheel line marker and a ready mixed paint.

As for irrigation, Matt relies on self travelling sprinklers on the sportsfields with water coming from a deep well. There is some restriction on the amount they can use but, to date, have never exceeded their extraction licence, even in the recent drought conditions.

Matt brings in local contractor, Arthur Peacock and Sons, for any specialist work such as vertidraining, end of season pitch renovations and overseeding, with Complete Weed Control carrying out weed and pest control. Eastern Trees are contracted in for all tree works.

Budgets are not excessive, and Matt has to justify to the Bursar and Headmaster the benefits of any investments made to improve the school grounds. Matt's main aim is to ensure that the grounds are fit for purpose and a safe environment for all who use them.

As for a wish list, Matt is keen for the school to invest in new cricket net facilities, along with looking to continue the investment in new machinery. He is hoping he will be given the budget to purchase a Sisis Quadraplay unit for the sportsfields, a new compact tractor and, last but not least, have funds made available for the reconstruction of the wickets on the main square.

It would seem from my visit that the school grounds are in very good hands. The working relationship between all the groundstaff is excellent, and they are all well respected by the teaching staff. Matt lives on site and has settled in to being part of a very well run school. There are plenty of challenges ahead to maximise the potential of the facilities at The Leys, but ones that Matt is up for.