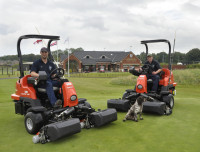 Longhirst Hall Golf Club, situated near Morpeth in Northumberland, was the first club in the northeast of England to take delivery of the latest hybrid greens mower from Jacobsen, the Eclipse 322. The diesel-electric hybrid machines were delivered recently by local Ransomes Jacobsen dealer, Rickerby Ltd, in time for the PGA EuroPro Tour event, held at the club early in June. Ransomes Jacobsen is a Textron Inc (NYSE: TXT) company.

The Lakes Course hosted the PGA event and the two mowers had less than a week to prepare for the competition, won by Hampshire's Stuart Archibald with a three-round total of 213.

The unique feature of these new mowers is that they are completely free of hydraulic oil, as the electric power for both the traction motor and cutting cylinders is provided by a small internal combustion engine and 48-volt continuous generator.

Principal operators of the two mowers are assistant course manager Stu Wilson, who has been at Longhirst for 15 years and greenkeeper Stephen Smith with eight years of service.

Stu Wilson commented, "Both machines are considerably quieter than normal greens mowers and they are much less obtrusive and make a considerable impact on any noise pollution. The other benefit is that there is no fear of an accidental hydraulic fluid spill on the course. From an operator perspective the Eclipse's are really comfortable, by far and away the most comfortable ride on mower I've used. We have groomers fitted and a frequency of clip set at 0.16 which gives a great finish. So much so that members have commented on how true the greens are playing. That's because with the frequency of clip ensures consistency across all 18 greens. In fact, Stephen's Eclipse is set exactly the same, so every green on the two courses is cut to the same specification."

Stephen Smith added, "By mid-July Stu's Eclipse had clocked up 140 hours and mine had 116 hours. We've been using them extensively and another benefit is the fuel savings; I can't quantify how much exactly, but we're using much less fuel than with our previous machines. Another surprising benefit is the traction; although only the front two wheels are driven we're getting better traction than a conventional three-wheel drive hydraulic greens mower. We have some fairly steep surrounds to some of our greens and getting on to them has not proved an issue; especially during the tremendous downpours we've experienced recently

Golf manager Graham Chambers concluded saying, "We delighted to be the first club in the northeast to take advantage of the new technology in the Eclipse 322. These mowers have exceeded my high expectations and they are a tremendous asset here at Longhirst."