1 First success for ‘Find me a job!’ campaign

The Pitchcare team is delighted to announce the first success of its Find Me a job campaign.

Surrey-based Peter Harsum, who we featured during week commencing 12th April, has been offered permanent employment at the prestigious Whitgift School after Head Groundsman Stuart Webber got in touch to let us know that groundsman vacancies were available.

Peter applied and following an interview he has been offered a permanent position on the groundstaff team.

Speaking to Ellie Tait, who is coordinating the campaign for Pitchcare, Peter said: "I would just like to let you know that I will be starting work at Whitgift School on the 14th of June. My family and I would like to thank you again for the work that you have put into running your campaign to help people like me find full-time employment again after such a difficult year. I am very grateful for this opportunity to get my life back on track, thank you."

Being made redundant is an extremely stressful time whenever it happens, but even worse when your partner's about to give birth to your first child. That's the position that Peter found himself in last spring. He was Head Greenkeeper at a club near Horsham when the owners decided to reduce the head count and Peter was informed of his redundancy. He had been working on a temporary contract basis for his local council as an Assistant Groundsman since last May, but got in touch with us when his contract was about to come to an end. Peter told Pitchcare that his redundancy has been 'life-changing'.

"To work hard to become a course manager, then to have it taken away was hard enough, but to face such financial uncertainty when you've just become a parent has been very difficult. My wife is working harder to increase her earnings, which is tough when you're a new mum, and we've had to change our lifestyle radically," he explained. 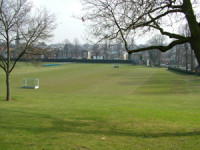 Confirming Peter's appointment, Stuart Webber said that Peter's skills would be a valuable addition to the team.

He also mentioned that he is interviewing candidates for a further groundsman's position. If you live in the Surrey area and would like to apply, please contact Whitgift School or alternatively, email ellie@pitchcare.com and we'll put you in touch.

Everyone at Pitchcare HQ would like to congratulate Peter on his appointment and to wish him and his family well for the future. We'd also like to thank Stuart Webber for getting in touch to flag up the opportunity and Helen Whiting at Groundsearch Consultancy, who has given her time free of charge to assist all our candidates with their CVs.

If you're unemployed and would like to feature in our campaign, please email Ellie Tait at ellie@pitchcare.com. We hope to be able to share a second success story with you soon, but in the meantime, there are other individuals all still looking for work. If you can help them, please get in touch.