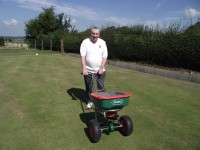 Not only did Peter take up a free opportunity to trial an Everris - formerly Scotts - turf fertilizer that helped improve the condition of the club's bowling green, but he also won an SR2000 pedestrian rotary spreader in a prize draw open to everyone who monitored their turf's response to the trial and submitted an assessment form ahead of the deadline.

The specific product trialled last October at Winchelsea Bowls Club was Everris' Greenmaster Pro-Lite Autumn 6-5-10+6%Fe, one of three micro-granular fertilizers that were available for visitors to trial free-of-charge in a promotion being run by the company throughout the show.

"The trial offer was for a single 25kg bag of fertilizer and, having spoken with the technical staff on the stand, I opted for Pro-Lite Autumn, rather than the other options of Double K or Invigorator, because our green was in serious need of improvement following less-than-satisfactory end of season maintenance carried out for us the previous autumn," explained Peter. "I particularly liked the fact that Pro-Lite's fine micro-granules disperse quickly for rapid turf response, yet have good longevity so they keep working for longer."

The trial was designed to ascertain the effect that Greenmaster Pro-Lite has on turf quality and performance. Specific weekly assessments were undertaken for sward density, colour, grass growth and wear tolerance. Additional observations recorded included the ease of application and speed of turf reaction.

The trial results showed improvements in grass sward density and colour within the first week after application. Additional turf benefits that were also observed during the trial included no flush of growth or soft growth, and overall improved wear tolerance. Feedback also showed that the product was easy to handle and apply and that there was a very even colour reaction across the whole surface after application. In general, trialists said their turf is generally in far better condition than it was this time last year.

"Our green was looking better than it had for years prior to April's hot, dry weather," commented Peter. "We were even seeing the return of finer grasses at the expense of Poa annua. Although the green has since recovered well from the drought, we will now be following a seasonal fertilizer programme that has been prepared for the club by Everris' John Noyce, who has been extremely helpful and supportive."

"Winning the spreader was a real bonus. Although we had never tried the company's products before, we will be a loyal Everris user from now on."

Everris is the new name for Scotts. Your products, distributors, and technical and customer service contacts remain unchanged. For further information about Everris' products visit www.everris.com and click through to the UK site.