0 First trophy of the season for Shepton Mallet FC 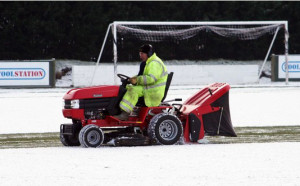 Shepton Mallet Football Club has picked up its first trophy of the season - thanks to the groundsman.

Rodney Neale won a national award from the FA, which has named him as groundsman of the year for step five and six leagues.

Mr Neale, 66, faced competition from over 1000 other clubs from more than 40 leagues around the country, but came away with the honour last weekend.

Recovering from a back operation, Mr Neale was unable to attend the award ceremony - held at St George's Park - and was presented with the trophy by Western League director Alan Skuse.

But he has been there before; last year he was highly commended for his work on the pitch at Frome, which he balances with his Shepton commitments

Mr Neale, who has looked after the pitch for Shepton FC since 1976, said: "I just can't believe it, it's fantastic, especially given the size of Shepton Mallet and the limited budget which we have. We don't have lots of money, but I have given the time because it is a seven-day-a-week job."

In his role as groundsman, Mr Neale meticulously weeds the pitch by hand, a job which starts in March each year.

Read the full story from the Shepton Mallet Journal HERE