by Rosie Duckworth
in Training & Education, Machinery & Mechanics, and Golf
on 24 Apr 2020

The greenkeeping industry is in good hands if the first Young Greenkeepers Education Day is anything to go by. 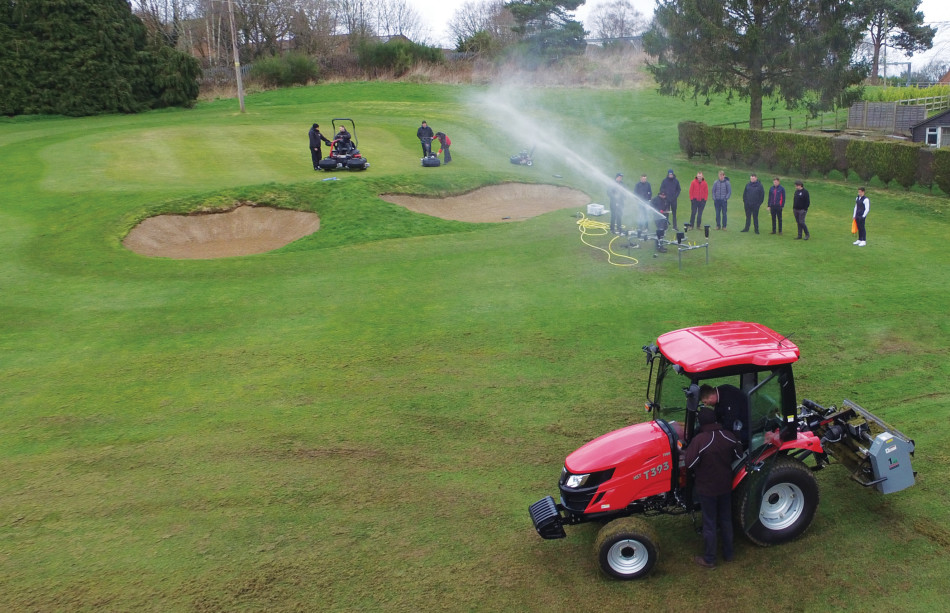 Machinery demonstrations and an irrigation display were conducted by representatives for Toro machinery, Toro irrigation and TYM tractors from Reesink Turfcare at the Young Greenkeepers Education Day.

The event earlier this year was supported by Toro and Reesink Turfcare, who were also two of the sponsors, and organised by Ryan Neale, greenkeeper at Blackwell Golf Club in his role on the BIGGA Young Greenkeeper Committee, Alex Brougham from Trentham Park Golf Club and Danny Patten from Huyton and Prescot Golf Club. It was designed to inspire and educate young greenkeepers through a series of interactive sessions, machinery, irrigation and tractor demonstrations and career development advice.

Rochelle Bedford, marketing manager at Reesink Turfcare, the sole distributor in the UK for Toro's golf and sports fields equipment and irrigation, and TYM products, says: "The initiative of these three young greenkeepers to have come up with the idea for this and to implement it, is really inspiring and it's a great match for our company ethos to promote and support the future of the industry."

Ryan says: "The idea developed over a pint of Guinness after a day volunteering at last year's Open Championship at Royal Portrush. I was with Alex and Danny talking about how great it would be if there was an exclusive event focussed entirely on content specifically for young greenkeepers. We wanted to encourage networking, improving confidence and sharing experiences to help with their own careers."

The event, held at Blackwell Golf Club in Bromsgrove where Ryan works, was designed for greenkeepers aged between 16 and 30. Volunteering advice and personal development was provided by Ryan, a career development presentation by Alex and an inspirational chat on the 10 minutes that changed his career was led by Danny in relation to his successful application to the 2018 Young Toro Student Greenkeeper of the Year Award. Machinery demonstrations and an irrigation display were conducted by representatives for Toro machinery, Toro irrigation and TYM tractors from Reesink Turfcare.

Ryan continues: "We all also agreed that not many of us get the chance to have a go on the latest equipment and how great it would be to give attendees the chance to see and operate the latest kit. Jon Lewis from Reesink Turfcare put a list together of the latest Toro and TYM machines available to demonstrate and the machinery station consisted of the Toro Outcross with ProCore 1298 aerator, two pedestrian mowers including the new Toro Greensmaster 1021, a Toro Greensmaster eTriFlex series ride-on mower, and two TYM tractors with various attachments. There was an irrigation display and presentation on different heads, set up and maintenance."

Reesink's Pete Newton, who was there on behalf of Toro irrigation, says: "The day had a bit of everything in it and worked really well. We broke down the concept of irrigation, explaining how to set valves, open sprinklers, set their arcs and manage basic irrigation problem solving, while also demonstrating some of Toro's irrigation products." While Scott Turner representing TYM tractors says: "It was great to meet the faces of greenkeeping for tomorrow, it represents a promising future for the industry, and we were delighted to be involved."

Rochelle continues: "We had a range of Toro machinery and TYM tractors there for attendees to try. Giving these young greenkeepers the chance to experience these machines gives a feel for what's possible with the right equipment and sets a benchmark for quality."

Ryan concludes: "We are very pleased with how the day went and look forward to planning, and helping others plan, similar events in the future. We were really lucky to have not just such influential players in the industry such as Reesink and Toro, ICL and Syngenta support and sponsor us, but to have such a good turnout of young greenkeepers keen to learn and network. The combination made for an incredibly successful day."

Article provided by Reesink Turfcare, the sole Toro distributor in the UK for golf and sports fields equipment and irrigation products: www.reesinkturfcare.co.uk