"It is a huge challenge to produce good pitches in these conditions, and the long hours can be tough. But, like most football groundsmen, I'm here because of my love of the club. As a big Aberdeen FC fan, it's my ideal job" 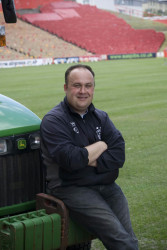 Eastern Scotland was one of the worst affected parts of the country during this winter's big freeze, yet Aberdeen Football Club lost just one fixture - and that was due to police closing the icy roads around the Pittodrie Stadium rather than the condition of the pitch, which Head Groundsman, Paul Fiske, reports was fully playable that January night.

But, the severe weather, and the demands placed by the team training on the club's only heated pitch, inevitably took its toll.

The pitch at Pittodrie was reconstructed five years ago, after a half a season's ground sharing with Inverness Caledonian Thistle doubled the wear on the 100 year-old facility. Contractors, Greentech of Stirling, took the surface down 16in, relevelled and installed a drainage system with 10m laterals. Then 8in of sand and 8in of rootzone was used to construct the pitch, with the work finishing just six weeks before the first game.

From frequently losing games to waterlogging, the new pitch represented a dramatic improvement, until the most severe winter for thirty years struck.

Paul, who joined Aberdeen Football Club fourteen years ago from a greenkeeper's job at Moray Golf Club, Lossiemouth, explains: "The first snow fell on 16th December, but we had to prepare the pitch for one match and four training sessions in fourteen days, and kept the undersoil heating on for twenty-two days."

In January the snow lay for three weeks and, from the middle to the end of the month, temperatures averaged minus 10OC. In total, Aberdeen endured eight weeks of snow, yet Paul managed to produce playing conditions for four training sessions and four matches in one three week period.

"When the team were training for the Scottish Cup match on Friday 8th January, the temperature was minus 11OC at ten o'clock in the morning," Paul recalls. "The pitch was so white that you could not see the lines yet, due to the heating, it was soft enough to train on. Afterwards, we brushed the surface and put the covers back on ready for the next day's game with Heart of Midlothian. On Sunday, the team trained again and, although there was grass coverage, you could see that the sward had gone."

The pattern was repeated three weeks later. Paul had to clear the stadium itself, snow ploughing and gritting as well as preparing the pitch for the game with Motherwell on 30th January, and a fixture with Falkirk on 2nd February was followed by two days' training in sub zero temperatures, once again giving the grass a battering.

We were able to maintain stability for most of the season, and we start out with a good root structure, but it is a battle with a rootzone pitch," Paul comments. "Ideally, you need to get water on the pitch, but it is difficult in those conditions. I just give it a heavy roll with a Rotoknife and try and water, if possible, but, once coverage is lost, it is hard to recover. In total, we had fifty-one days of undersoil heating, and it just burnt the roots."

A cold spring, which has not encouraged regrowth, hasn't helped, and Paul comments that, with limited funds, it is difficult to bring the turf back. He also has a small team to maintain six pitches in total, with three training pitches at the local barracks and two at the university, and it has been smaller than ever this year.

"My two groundsmen are both currently on long term sick leave and I'm relying on a retired farmer for help - at least he can drive a tractor!" he says.

Going forward, he believes that a compromise will need to be reached with the management to minimise training on the stadium pitch in severe weather.

"We just cannot afford to use lights or returf, as other clubs do, to revive their pitches, and players and the media need to understand that we are always going to struggle this far north. Once grass has been damaged by playing on it in freezing conditions, there's no coming back," Paul says.

By broadcasting seed throughout the season to encourage fresh growth, 75-80 percent coverage was achieved, with the pitch looking good by the end of the season, and only a light renovation has been necessary.

"We koroed the pitch in 2009 to remove black layer and algae before reseeding, so this year I've just used my Dennis cylinder mowers set at 10mm to fraise mow, cleaning up the surface," Paul explains. "We put 40 tonnes of rootzone topdressing on and overseeded on 18th May before putting the covers on, so it was a relatively easy job."

To ease the staffing issues, Greentech were engaged to vertidrain and sand band the barracks grounds, before applying 100 tonnes of sand and overseeding. The university grounds just needed a heavy topdress and overseed.

Paul uses Johnsons Premier Pitch ryegrass mixture, citing its good mix of cultivars which, he says, germinate quickly and have a strong root system.
"Prior to seeding, I use PrimoMaxx to stunt the growth of the existing sward and allow the new seeds through, and I don't apply a pre-seed."

After a week, the covers were removed and, after two weeks, the pitch was ready for a light mow with a Hayter rotary.

"Terralift TX10 organic fertiliser gives the turf body at this point and, at the end of June, I add Scotts Sierrablen slow release. Just before the season starts, Scotts Greenmaster goes on to improve the colour," explains Paul. "I like to use a pedestrian sprayer to apply biostimulants rather than take a tractor on the pitch, and Floratine really gets into the plant. Sand based rootzones need a lot of feeding, and it's a way of improving nutrition while getting the right balance between foliar feeding and granular applications."

Equipment is one area where the club is well blessed. After success in Europe a few years back, the chief executive provided the cash to upgrade the fleet from an old Ransomes Mastiff and a spiker.

We have the machinery to do most maintenance and renovation work in-house, except when I'm short staffed like this year. The Rotoknife is one of the most valuable items of kit, as it does a great job of rolling, and the discs can be used to keep the surface open. I also like my Hayter rotaries, as it is good to be able to use such a lightweight mower on the young grass. In July, we move onto the Dennis cylinder mowers and then the Toro cuts the pitch at the end of the season, although I'll use it before the match as it allows me to get it mowed on my own."

Groundsman, Nigel MacRae, is a trained mechanic which, Paul says, is enormously helpful, as equipment can be maintained economically and in a timely fashion.

"Nigel even takes the mower blades to a local golf club to use their grinder and, if we have a breakdown, we don't have to wait until a dealer can fit the machine in, he simply fetches the required part and fixes it. It's ideal for a club on a tight budget!"

After more than 100 years at Pittodrie, Aberdeen FC is preparing to move on. A planning application for a new stadium at Loirston is to be submitted this summer, after a lengthy consultation process which was generally well received. The new Aberdeen Arena is likely to host concerts and rugby matches as well as being the club's home, and will incorporate training facilities for the first time.

"It is very early days," says Paul, "but I have visited a number of other clubs to study their facilities, right down to machinery storage - currently much of our equipment is kept outside. As it will be multi-purpose, the pitch will have to be constructed of Fibresand or a similar material. Rangers have Mansfield Fibrelastic which looks excellent."

Relocating the training pitches to a main stadium will also end one logistical nightmare. Currently machinery has to be transported through the main roads of Aberdeen to the training grounds.

"It is an exciting prospect - the current stadium is getting old, so it is definitely the right thing to do. It's important to get the new pitch right from the start and make sure that it can cope with its multi-use role," Paul comments.

Whilst he admits to being envious of his well funded southern counterparts, Paul says that he is unlikely to be tempted by a job offer in a more temperate climate.

"It is a huge challenge to produce good pitches in these conditions, and the long hours can be tough. But, like most football groundsmen, I'm here because of my love of the club. As a big Aberdeen FC fan, it's my ideal job."