There can't be many more picturesque settings than Fitz Park Bowling Club in Keswick in the heart of the Lake District. But, when Storm Desmond swept through in December of last year, the River Greta burst its banks causing devastation across the town and dumping six inches of silt on the club's greens. Mike Robertson of Greta Garden Services explains to Alice Northrop how the club turned things around to be able to play this season

The green sparked my interest when I saw the launch of their impressive new website, and saw the devastating pictures of the damage caused by Storm Desmond, which hit the country in December last year. So I spoke to Mike Robertson, of Greta Garden Services, who advises the club on their bowling greens with his business partner Pete Rainey.

When I spoke to Mike, they seemed a long way from the flooding back in December: "It hasn't rained for a few weeks, to be honest. The bowling green next to us was relaid two weeks ago and it's basically droughting off now and there's nothing left. I look after a couple of cricket squares as well and they are drying off. It's either feast or famine up here." 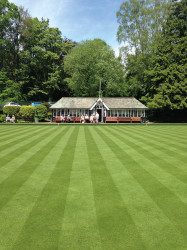 Mike has been in the turf industry for about thirty-five years, and started off helping at the cricket ground where he used to play, before being asked to work at the local golf course. "I wanted to go and do something I enjoyed; it's my main love really, sports turf. I went to Myerscough College and did an NVQ level 2 and 3. Then did an HND in Sportsturf and Golf Course Management." He was then made Head Greenkeeper at Penrith Golf Club, followed by ten years as Head Greenkeeper at Maryport Golf Course.

Pete and Mike went to Myerscough together and have remained good friends. Pete was also a Head Greenkeeper and, when out cycling together one day, they spoke about how they were both getting disenchanted with the golf industry; "Just the fact that the numbers were dwindling and the budget seemed to be getting cut every year." So the two men started their own business. "It was mainly gardening, but we have progressed more to the sports turf side of things now."

"Myself and Pete work together probably three days a week. Then Pete does his gardening and I do the sports turf work. I look after the square at Penrith Cricket Club, they play in the Northern League. Then I have my ECB work to do as well." Mike is referring to his ECB Pitch Advisor role for Cumbria. He was appointed in November after completing the training. "At the moment, I am also going to Culgaith Cricket Club for half a day a week to get their square up to scratch."

"We do quite a bit of advisory work for different bowling greens. We've had two or three bowling greens, seven hour days where Dennis Sisis have come and demonstrated their machines and we've had speakers about fertiliser. We normally get about fifty to sixty for those."
The Fitz Park Bowling Green is Mike and Pete's "shop window".

Mike tells me, "People have said, over the last couple of years, that it has gone from being a really good bowling green to being one of the best in the county." The members look after the green, with the advice and guidance of Mike and Pete. "I just turned up one day when they were putting fertiliser on. They had four bags of three different types of fertiliser. So I said, 'well, why don't we try and put the right fertiliser on for a start?'"

"Our first comment when we go into a bowls club is that we won't necessarily save you money, but we'll make the best use of the money you've got. I've gone into some bowling greens where they've sprayed monthly for fusarium, and I've pointed out that, through the middle of the summer, there's not really any need to be spraying because it's going to grow through, so the money that you're saving on fungicide, you could put towards some topdressing. It's just trying to get that mentality. Coming from a golfing industry, we always topdressed at least once a month, sometimes every three weeks. Just doing little and often to try and maintain the surfaces. It's about getting the bowling clubs to move away from thinking that all the topdressing has to go on at the end of the year."

"At Fitz Park, we topdressed probably three times last year throughout the season. We use about forty bags, which is a light dressing. We pick a window of opportunity where we've got nothing on later in the week, or there's rain forecast and we try and do it then, and it's made a hell of a difference. The surface is firmer, we don't need to cut them as low, and we don't, therefore, put them under as much stress."

So, to those floods. On Saturday 4th December 2015, the River Greta, which runs through Fitz Park, burst its banks following incessant rain and the bowling club was flooded, along with the park and the other sports facilities. The river continued to rise through Saturday, eventually spilling over the flood defences and into houses on the surrounding streets.

"I've lived in Keswick for twelve years and we've never seen anything like it. It was the perfect storm; two months of continuous rain and then about nineteen inches in forty-eight hours. Because of the flood defences, it basically turned the park area into a flood plain."

Nobody could access the club until Monday. "When I got there on the Monday, a lot of the older guys were in tears when they saw the state of it. They have spent quite a bit of money over the last couple of years, getting it to a point where we were getting county events." 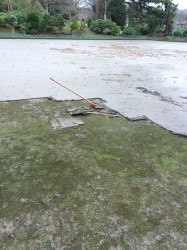 "Fortunately, they'd put up some scaffolding netting to keep people off with dogs, so that stopped a lot of the debris, but we probably had about four or five inches of silt covering the whole of the green. So I suggested we took off a six foot square of the silt and come back the next morning to see what it looked like. When we came back the next day, it was green where we had cleaned it off. So I suggested that we should get the silt off as quickly as possible."

Eighteen volunteers with snow shovels and wheelbarrows cleared the green of silt in a day. "It was good, because the town had been absolutely devastated, and it was like a little jewel amongst the havoc, with people asking whether others had seen the bowling green and how green it was. It made a difference."

"We put a plan together for renovation to try and dilute the silt. After we had cleared the main silt off, we used the Sisis Auto Rotorake over the top to try and lift any silt that was left in the soil profile. We were quite lucky that we got the silt off fairly quickly, so it didn't really get enmeshed into the sward. One of the main problems was that we had to sit and wait for it to dry enough to be able to work on it. We took the Auto Rotorake over the top to mainly agitate the surface so we could break up the silt layer."

"Then we had a power brush that we put on the Auto Rotorake and it was a case of continually tickling the surface and brushing until we got as much silt off as we could." 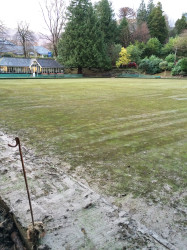 "We then went on with our Toro ProCore fitted with hollow tines, because that was the quickest way to try and get rid of it. We just tined to about an inch and a half; we didn't go any deeper because there was no silt below that. Also we had topdressed quite extensively over the past two years and the last thing we wanted to be doing was taking all the good topdressing out."

"Next, we put a Graden over the top down to 20mm. Then we power brushed again, overseeded and topdressed. We used a dwarf rye bowling greens mix from Johnsons, which is reckoned to be harder wearing. Then we went back to our normal routine of using something with a finer prill."

"I've been speaking to the guys in charge of the club to convince them that we need to do more topdressing, so I think we'll be applying 80 bags (about two tonnes) in the next couple of weeks. The bowling green is now up and running and, to be honest, you wouldn't have thought anything had happened. It's been quite an extensive process, but now the green is almost back to where it was previously and they are playing on it."

Mike and Pete call in at Fitz Park three to four times a week, but work there about two or three half days a month. The volunteer members at the club look after and cut the green on a regular basis.

"A lot of the clubs we go to have a diary that they work to that's been passed from generation to generation and each greenkeeper follows that diary. So it's a case of trying to educate. We always say, when we go into a bowling club or a cricket club, that we aren't there to tell them how to do their job, we are just there to point out that there may be better or more cost effective ways. So, if they're spending £5,000 a year on their bowling green, let's try and get the best out of that £5,000."

The community spirit at the club is something I picked up on throughout our conversation, as well as from the website and my correspondence with other members. "The way that everybody has worked together at Fitz Park has been absolutely fantastic. If you looked at the green the day after the floods, you'd never have thought they'd be playing bowls on it this year," Mike concludes.