0 Five a side flourishes on former car park

Five a side flourishes on former car park 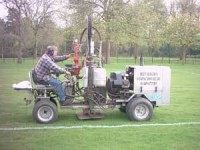 "We used to have a very good pitch," says David Clark, Estate Manager for SAS Software at Marlow in Buckinghamshire. "We actually built it ourselves. It was very free draining and we played on it for two years."

In 2000, the company began work on a new, £14 million extension and moved 40 staff into temporary office accommodation alongside the pitch. The proximity of the football ground made it the most convenient area to serve as their car park. After taking a two tonne roller over the whole area, ribbed aluminium sheets with perforated drainage holes were put in place to cover the surface. David Green of Terrain Aeration, who was brought in to treat the pitch, takes up the story.

"Aluminium tracking was laid down over the existing turf and during the very wet winter of 2002 the clay soil beneath became so saturated that when the cars rolled over the surface, water spouted through the drainage holes. As the site continued to be used as a car park during last year's long hot summer, the whole of the clay based soil and subsoil profile had been saturated, compressed and then dried out in its compressed state."

Once the new extension was finished, last October, the aluminium sheets were removed from site, and David Clark began renovating his old football ground.

"We found we had almost a solid concrete base," he remembers. "We deep rotovated to about a foot, took some stone out and added fine top soil. We laid new turf and it went down quite well, but because of the compaction pan lying approx. 18 inches underneath, the pitch filled up with water and we had half an inch of it all over the surface. Despite repeated deep spiking it was impossible to play. I'd seen Terrain's four wheeled terralift machine at Saltex but hadn't had the chance to see it in action. I contemplated using a mole plough, but this would have disrupted the surface. I decided to contact Terrain Aeration."

David Green arrived with Airforce, the company's four wheeled hydraulic terralift machine and injected compressed air at 14 bar, one metre down through a 37mm diameter probe. The air blasts fractured the clay pan creating fissures from one metre down to the surface, thus aerating the area. Dried milled seaweed on the final air blast will expand on contact with moisture, keeping the fissures open and adding nutrients.

"At about 900mm below the surface the probe met chalk," says Green, " which means that we've opened channels directly from the surface to the bedrock."

After treating the whole 40 by 20 metre pitch at two-metre spacings on a staggered grid pattern, Terrain back filled the probe holes with mower friendly aggregate and left site.

David Clark watched the surface of his newly aerated pitch, and the weather closely.

"The week before treatment the whole area was waterlogged," he reports, "and during the weekend after Terrain had left we had just over an inch of rain during Saturday night and Sunday. I was on the pitch at 8.00am. on Monday morning and went stamping all over it. The grass was wet but there was no surface water and I judged it capable of play. We had our first game two days later. It's just amazing. I'm a very happy bunny!"

For further information on the deep aeration services of Terrain Aeration, contact the company on Tel: 01149 673783 or visit their website at www.terrainaeration.co.uk