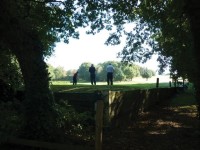 "I have always believed in the importance of well trained and motivated staff, and give my staff every opportunity to progress their careers"
Tony Mears, Head Greenkeeper, Shanklin & Sandown Golf Club

In 1900, after months of clearing high gorse from the site and building greens and tees, Shanklin and Sandown Golf Club was opened for play. The original inspector of the project was Dr, John Cowper of Shanklin, whose knowledge of landscapes and countryside was enough to convince him that this was a prime piece of golfing territory Those original 9 holes, designed by Tom Dunn, continued to be improved and, in 1901 after Tom's death, the great and famous architect, James Braid, was called in to complete improvements.

In 1903, work continued and the course, now 18 holes, was completed later that year. After purchasing more land in 1923, it was improved further to remove some cross-over holes.

Braid was a highly skilled architect with a sympathetic eye for design. He had designed many great courses, and his philosophy was that the course should be laid out as suggested by the lie of the land, every natural obstacle being taken care of. 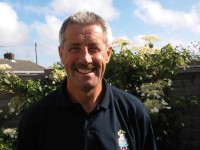 When the club recently advertised for a new Head Greenkeeper, it was the attraction of working on one of Braid's designs that encouraged Tony Mears to apply for the position. Tony, a long time admirer of Braid, was keen to manage one of the master's designs. "It has always been a long time ambition of mine to work on a James Braid designed course" said Tony. His greenkeeping career spans thirty-five years and, on leaving Dinsdale Spa Golf Club after twenty-nine years to move south and take up his new position, he had already presented a comprehensive five year plan to his new club, detailing major course improvements to bring it into the 21st century.

"The potential is fantastic. There are some superb holes here, I will just present them differently, whilst making improvements and updating the course," he explains.
Tony has always been a very progressive manager and, during his years at Dinsdale Spa, made countless improvements to the course; rebuilding, extending and revamping much of it. He was also very actively involved in greenkeeper training in his BIGGA local section, speaking at conferences and shaping the future of greenkeeper training in a role within the GTC, whilst also representing BIGGA as part of the 2003 Bernhard sponsored trip to the GCSAA show.

"I have always believed in the importance of well trained and motivated staff, and give my staff every opportunity to progress their careers. 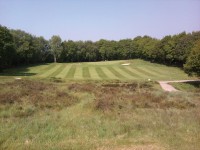 " As you can imagine, staff training and development is an important part of Tony's plans at Shanklin & Sandown, and he will encourage his team of five - Deputy, Robert Hancock; Assistants Guy Mitchinson, Micah Knight, Tim Creed and Jamie Tredwell, plus part-time fitter, Paul Knight, to be the very best they can. They have already attained new skills and qualifications at training courses.

But, what else does he have in mind? On being appointed, one of the first things he did was to arrange a members' open night where over one hundred members attended and listened to his detailed plans. "I have always believed in the power of information and communications," says Tony. "During my powerpoint presentation, I informed the members of some of the more disruptive work that would impact on them and the golf course and, more importantly, why we were doing it. It was a very positive meeting, and the members who attended could see our objectives and, ultimately, my drive to make the course not only the best on the island but one of the best in the south."

Soon after the meeting, the work began, and one of the first tasks was sharpening the chainsaws and removing eighteen leylandii trees that had formed a semi-circle behind the 12th green. "Many of the greens and tees are surrounded by trees and scrub, which is reducing airflow and light," explains Tony. "This has also played a 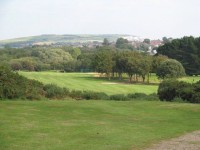 part in the reduction of heather on the course, so we have started a tree and scrub removal programme which will improve the performance and health of all surfaces. We are also beginning a heathland restoration programme to restore as much of the heathland character of the course as is possible."

Tony has met with local heathland course managers to look at various successful methods of regeneration, which has helped him in formulating his own action plan. He has identified areas on the course where he would expect heather to flourish, given the opportunity.

Once encroaching trees and scrub have been cleared, he will also remove any fibrous leaf litter to expose the mineral soil, and then cover with heather litter. Over a period of time, this will restore much of the original character of the course."I have been told some areas will regenerate much quicker than others, and some possibly not at all."

As well as the heathland restoration, Tony will be re-levelling tees and remodelling bunkers and surrounds to accommodate the demands of the modern game. "There are a number of uneven tees on the course, and also some where we have the opportunity to extend back and upgrade rootzones to allow the tees to withstand the demands of today's traffic levels. In addition, we are starting on a bunker restoration project which will see all of the forty-six bunkers reno 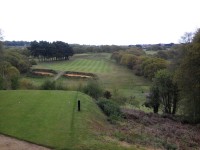 vated; some may be moved and some reshaped, again bringing the course up to date."

"These are exciting times and some great projects for all the staff to become involved in. The only trouble is that there is so much work to do, and I want to do it all at once. Patience is key, and I keep having to remind myself that this is a five year project."

He has already intensified his cultural practices on the greens surfaces, starting last autumn with some heavy scarification work, with the Graden set at 20mm, to remove the build up of organic matter. This was followed up by a further treatment in the spring, and the plan is to carry this out twice a year, combined with more intensive solid micro tining at varied depths. This will improve all round performance of the surfaces, aid percolation and help strengthen the plant and, combined with the tree and scrub clearance, will see a significant improvement all round.

"I am looking to improve grass species, which is currently Poa/Bent with Poa dominating, and turf vigour, health and playability," explained Tony.

He has been working with Alex McCombie from ALS to give guidance in formulating his nutrition programme and offer suggestions. Tony's philosophy is little and often, aiming to apply around 90Kg N. "I like to start with a granular base feed which, this year, I decided to try Headland Greentec 13.3.13 before moving across to

liquids - Headland N Sure 28.0.0 - which I tank mix with Seamac Ultra Plus. I have heard good reports on the Headland range of products and have been very pleased with results achieved so far."

"In the autumn, I will be using a higher K feed, along with plant hardeners, to help strengthen the plant going into winter"

Heights of cut are: summer greens 3.5mm rising to 5.5mm in the autumn/winter; approaches 9mm rising to 14mm at other times; fairways 18mm rising to 25mm; and semi rough 50mm. Topdressing is carried out on a light and frequent basis with the Propass, and Tony is aiming at applying 100 tonnes over the season. This will aid in firming up surfaces as well as diluting organic matter.

Walking around the course it is already very clear to see the amount of work that Tony and the team have carried out since his arrival. It has a more open look and feel to it, and you can feel the increased air movement. The turf is able to breathe more and absorb precious sunlight for longer periods, which will bring enormous benefits to plant health and playability. 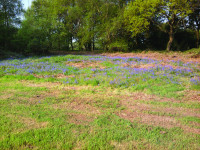 What is also very evident is his passion and commitment to the club, the course and the plan he submitted on his appointment. "We have a number of exciting years ahead where all the team are actively involved in a complete course restoration and development plan. My team has been excellent; all are embracing new skills and looking forward to playing a great part in the club's future and making the course one of the best in the south of England." enthuses Tony.

Exciting times, indeed, where everyone will enjoy the benefit of the team's hard work. James Braid would be happy to know one of his great courses is in such capable hands, ensuring both the current and future generations will enjoy his island gem.