John Turner carried out his daily tasks against a backdrop of complaints and displeasure, and he credits his 'honeymoon period' and the support of his greens chairman for getting him through it 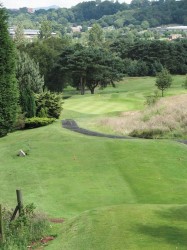 If you're ever in the Midlands, and have time to pay a visit, you'll discover a superb, tree-lined course in the heart of the Staffordshire Moorlands. Founded in the early 1890s and having had two previous homes, Leek Golf Club established its present site in 1923, following the purchase of approximately 100 acres from neighbouring Big Birchall Farm.

Although relatively compact for an 18-hole course, Leek boasts a rare, if not unique, feature in that there are four starting points, allowing members to arrange social golf without booking a tee time.

Up until 2003, if you'd stood up by the clubhouse on a warm summer's day and scanned across the panorama of rolling fairways and greens, you'd have admired the emerald greens criss-crossed with beautiful, even stripes and envied the golfers their freedom to enjoy the sport. If you'd visited in the winter months however, it all looked very different, with the regular use of winter greens, the use of trolleys restricted during wet weather and footprints left on the greens after use.

The problem with thatch

The greens were overfed and overwatered to achieve colour and top growth. The result was thatch, and lots of it. In fact, lack of scarification had allowed it to build up to 5" deep on some greens. The aeration progamme consisted of an annual hollow tine, combined with irregular winter slitting. Unable to drain, the greens became so saturated after rainfall they would be virtually unplayable during the winter, and the use of temporary greens was commonplace rather than the exception. 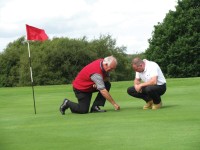 All elements of the maintenance programme created the ideal environment for disease, which required regular fungicide applications to fire-fight the outbreaks. Such applications had increased year on year and topped out at an astonishing eight, at full rate, in 2000/2001.

The cycle of perpetual feeding, watering and fungicide and lime applications, with its inherent problems and huge, repetitive costs, had become endemic and the playing season had grown shorter as a result. It created a problem that could never be solved, unless radical action was taken.

Fortunately, the club's current Greens Chairman and then Captain, Lincoln Boulton, along with other senior committee members understood it to be a self-generated problem that required an intensive and coordinated solution, and their first task was to find the man for the job. 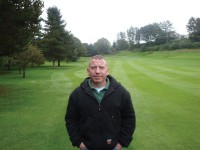 John Turner, previously Head Greenkeeper at Leasowe Golf Club on the Wirral, was appointed in March 2003 to rectify the problem. As an experienced greenkeeper, John knew instantly that he had a major task on his hands that would require far greater input than he and his five full time staff and one part-timer could deliver. The club didn't have the capital to replace the greens, so he put forward a recovery plan which was well received by the club, and they agreed to make the investment to allow it to happen.

"The greens were spongy, like walking on the moon," John recalls, "and 95% Poa annua and 5% Yorkshire Fog, with no root system. To achieve speed, it wasn't uncommon for the height of cut to be reduced to 2mm." Ironically, it was the club's summer maintenance regime that exacerbated the problem. It consisted of feeding, followed by regular watering, as this was the only way it was possible to cut down to the putting surface.

John recognised he needed expert advice and access to specialist machinery. He also knew that it would not just require a financial commitment from the club, but also the strength of will to carry the process forward through some difficult times.

He embarked on a long and arduous process, aimed at returning all year round playability within three years, and first class greens within six years.
Ringing in the changes

John cut off all bulk feeds and reduced watering to a bare minimum, which sent the greens into shock. "They discoloured and huge bare patches appeared. All I had was some light topdressing to try and muster some sort of playing surface," he recalls. 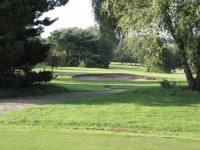 Then it was time to bring in outside help to tackle the thatch problem. John contacted sports and amenity machinery specialists, Campey Turf Care Systems, and sales director Simon Gumbrill visited the course to offer advice on a possible course of action. "Actually, it's not that uncommon for golf clubs to mistake good presentation for a good surface," said Simon. "Temporary greens are often accepted as a necessary by-product of our wet winters. But, the truth is that, with good maintenance regimes, golf greens can remain playable throughout the year, barring deep snow. However, in Leek's case, it was obvious that they needed to go right back to basics and start again."

John tried various methods of aeration, scarifying and verti-cutting to remove the thatch but it had a negligible impact, so the Koro by Imants TopMaker was brought in to scarify and lay bare the hard pan of soil that had settled underneath. John applied three tonnes of sand per green and used a Koro Recycling Dresser, aerating the profile horizontally and vertically, ameliorating the sand with the rootzone and redistributing it as a dressing.

"I hadn't seen the machine before and was amazed at how it performed. It dethatched, decompacted and introduced crucial air. Because we had no root system we had to wait for stability to improve. When it did, the club purchased a New Holland TN tractor and a verti-drain to enable m e to inject sand, compatible with the topdressing, into the lower sections of the greens as they consisted of bands of heavy clay and sandstone. That September, we verti-drained again with 1" tines, achieving 15" depth and sand dressing for the second time that year, using over 120 tonnes of sand and 60 tonnes of topdressing."
Trouble at the Top

The greens, at this point, were extremely poor. Bookings reduced significantly, and it took its toll on the membership as the scale of the works really started to impinge on play. John carried out his daily tasks against a backdrop of complaints and displeasure, and he credits his 'honeymoon period' and the support of his greens chairman for getting him through it.

Throughout this period of upheaval, Lincoln Boulton, and his previous Greens Chairman, remained steadfast to the cause. Balan

cing the demands of the head greenkeeper, members and fee paying golfers is never an easy equation, but he was adamant that John would receive the full co-operation and support from the board. He took it upon himself to stand firm and address the needs of both parties with fairness, but remained resolute and determined to achieve the goal, regardless of the short term pain the club would inevitably sustain.

"There is no doubt that our visitor numbers suffered as a result of our decision to carry out this work," Lincoln concedes. "But we pushed it through and, fortunately, it was prior to the recessionary impact of the past year or so. If we had to make the choice now I think we would be hard pushed to find the necessary funds and the willpower from the committee to carry out such disruptive work."

"The members demand good presentation as well as good play," said John. "My background is in Links courses, where the environment is far more natural. Sometimes, it's not always possible to achieve both, but I understood their frustration. Another bone of contention was the amount of time spent re-establishing the greens. It was a massive task which caused a lot of controversy, particularly with some 'environmental areas' being taken out of play." 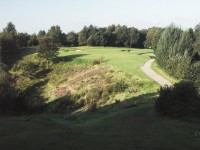 During the winter of 2005, John and his team achieved winter playability and performance and this ray of light, at the end of such a bleak year, signalled the second phase of work to establish the root system.

They aerated intensively throughout 2004 and 2005 and lightly topdressed with a Dakota 410 towed topdresser, which they initially borrowed from another club, before purchasing their own. An outbreak of fusarium in December required a fungicide application - only the second in 15 months - which was a huge improvement. 2006 was dedicated to adapting the sward composition.

Simon Gumbrill was so impressed with the club's strategy, that he contacted Steve Isaac at the R&A the following January. Steve was in the process of setting up the sustainable golf course project, and was looking for clubs across the country to use as case studies. As a recognised sustainable golf course, John and Lincoln now provide a constant flow of feedback and measurements to the R&A, including stimpmeter and moisture and prism gauge readings, to illustrate to other clubs how improvements can be achieved.

In previous years, the course only looked and played at its peak in the months of June to September. Now, it achieves a consistent level of play all year round and the greens are firm in winter as opposed to springy and soft underfoot. 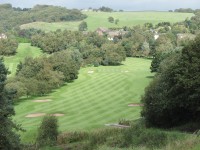 John's initial target of reducing the thatch by at least an inch a year, to avoid placing too much stress on the plant, has been achieved. 2006 was spent improving the sward itself by replacing, what was, 95% Poa annua by overseeding with the hardier Aber Royal brown top bent from British Seed Houses, having conceded that the uptake of fescue was too poor to warrant the investment.

With regard to nutrition, John uses a low nutrient input programme based on Farmura organic and seaweed products.

Overseeding was carried out five times in 2006 but, with good establishment and maintenance, is down to 2-3 times per year, with a focus on the weakest greens.

"Our course maintenance regime has changed in every way, much more basic; back to basic greenkeeping, done well," explained John. "We're now looking to begin improvements on tees and, specifically, areas which have localised issues. I would like to verti-drain on a much wider scale, but the budget at this point doesn't allow for it." 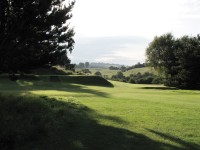 "The membership numbers have dropped like it has at other clubs at the moment but, because of the condition and quality of Leek Golf Club, we feel we're ahead of everyone else locally," added Lincoln. "With the impact of the recession, our greens budget would have had to be slashed. As it is, we have made savings, but still made progress. The committee has backed me with purchases of machinery if I put a good case forward. The Dakota was a big purchase, but we've had more benefit from that than anything else, and the aeration machinery has been superb too. It's important to us to have our own kit, so we can use it when conditions are favourable."

It is a measure of the club's pride in its revitalised course that golf is planned around the maintenance programme, not the other way round. A maintenance week is allocated in the middle of the playing season to coincide with the Captain's weekend away. This provides one week of intensive work and a further week to allow recovery.

In difficult times, the achievements of a partnership between a Head Greenkeeper, Greens Chairman, and committee, working closely with their machinery supplier Campey Turf Care Systems, has proven an extremely effective and formidable force for change.