1 Fleetwood set to create the ‘wow’ factor with ProSelect 1

Fleetwood Town Football Club's head groundsman, Dale Frith, is looking to Everris to help him raise the standard of the club's pitch to even higher levels for the 2012-13 season, when the club will be playing in the Football League for the first time in its history.

Newly promoted to League 2 as Blue Square Bet Premier League champions, Fleetwood Town has been using Everris turf fertilizers since Dale joined the club in October 2010. The result has been a continuous improvement in the health, appearance and playability of the pitch, attributes that helped Dale win the Football Conference category in the FA Groundsman of the Year Awards for 2011.

With no football within the stadium until mid-July, Dale is preparing to re-level the pitch and install new drainage before seeding with Everris' ProSelect 1 Premium Sport, a 100 per cent perennial ryegrass mixture recommended by Everris' technical area sales manager, Simon Hardcastle.

"My success with Everris, formerly Scotts, fertilizers over the past 15 years convinced me that the company's grass seed would be a sound choice for the pitch renovation programme," he said. 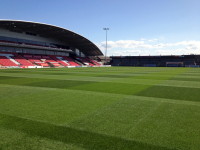 "Combining a striking dark-green colour with excellent tolerance against cold, drought and heavy wear, ProSelect 1 has all the qualities required to move the pitch towards Premier League standards, a goal I have been aiming for since joining the club."

Dale pointed out that his decision to specify ProSelect 1 seed mixture for the main stadium had been rewarded immediately by a special pitch renovation offer being promoted by Everris this spring. For every bag of ProSelect ordered, you receive a free 25kg bag of Everris' Sportsmaster Pre-Seeder 8-12-8 fertilizer, subject to a minimum purchase of three bags of ProSelect.

"I ordered 25 bags of ProSelect grass seed and received free-of-charge a similar quantity of pre-seeder fertilizer which will be worked into the rootzone prior to seeding by Danvic Turf Care, the contractor engaged to level, drain and restore the pitch," Dale explains.

The intention, he says, is to provide the club and its visitors with even better playing surfaces than the pitches he managed to produce last season. "I call it 'creating the wow factor' in terms of look, feel and playability. With Everris' help and support, I'm now looking forward to wowing them within the Football League next season."