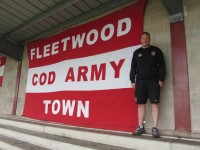 A sense of pride and anticipation is palpable at Fleetwood Town Football Club, newly promoted to the Football League after winning the Blue Square Bet Premier, and with its Highbury Stadium looking pristine after a recent facelift, both on and off the pitch.

The club, whose chairman, Andy Pilley, runs his blossoming BES Gas and Electric business from new, high tech offices next to the pitch in the Parkside Stand, is a symbol of hope and progress in the Lancashire town which has seen the fishing industry that was once its lifeblood all but eroded.

And the developments have come thick and fast, as the club has risen through the footballing ranks. Fleetwood Town's players only became a full-time professional squad for the 2010-11 season and, until Dale Frith was engaged in 2010, contractors looked after the pitch.

"Our chairman is committed to investing in the club and to driving forward its success," comments Dale, "and it is so important to the local community. The turnout for the victory parade when we won the Blue Square Bet Premier was incredible."

The Highbury stadium has been home to the club since 1934 - its name is not a nod to Arsenal, but to the Highbury Avenue which runs along its length. Historic photographs show the odd shed and a few grass banks as the only spectator facilities. That's a far cry from what today's supporters can enjoy, with the Percy

Ronson stand completed in 2007, the Memorial and Highbury stands completed in 2008 and the plush Jim's Bar where home and away fans will mingle this season and can watch matches and other sports on big screens. Not to mention the new Parkside Stand which, as well as the club and BES offices, also provides ultra-modern changing rooms, hospitality boxes and the control room.

The pitch has not been left out either, as Dale explains: "Prior to 2009, it was a typical non-league pitch, rather unlevel and poorly drained. Consultants TGMS (TurfTrax) and contractors Danvic were engaged to regrade it and install drainage, plus a pop-up irrigation system. A 100mm rootzone carpet was added using Rufford TurfStart in an 80/20 mix with lignite and Everris slow release fertiliser."

He comments that the club has not lost a game to waterlogging or frost since and, on two wintry occasions, was the only club in the bottom divisions not to cancel.
"We have also invested in a full set of frost sheets - the chairman is happy to spend money in order to save money, and the sheets have already paid for themselves."

Last winter two inches of snow fell on top of the frost sheets before a fixture, but Fleetwood Town's supporters - known as the Cod Army in deference to their fishing heritage - board and management joined forces to sweep the snow and the game went ahead. 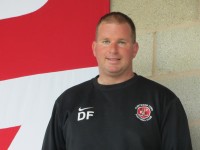 "The weather this year has been a challenge," admits Dale, "and, with the sea on two sides and the river on another, we do have an odd climate, which sometimes bears no relation to what is happening elsewhere locally!"

Ironically, the summer's early heatwave came just as renovations began. The pitch was koroed off on 16th May before 4m lateral drains were installed, and sand spread to address levels, before cultivating and finally seeding on 29th May. "We needed a bit of water straight after seeding, but the rain soon took over!" says Dale.

After the initial renovation in 2009, the pitch had been seeded with Rigby Taylor R14, and Dale then swapped to Johnson Premier Pitch in 2011, which, he says, gave better results.

"But, I work closely with Simon Hardcastle at Everris, and I wanted to try Everris Pro Select 1 this time. It was very quick to establish, as all ryegrasses are, but has also developed a good root system. Its qualities of colour and vigour also appeal."

Everris 8:12:8 pre-seed fertiliser was applied, and Dale continues through the season with slow release Sierrablen and liquids as the sward develops. PrimoMaxx is also applied to thicken up and reduce mowing frequency, essential with Dale's small team and busy workload. 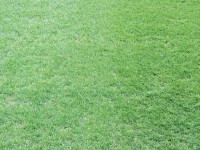 Overseeding will follow in September, and then again in March, to maintain quality on the hard-working pitch - which will host 40-odd fixtures over the winter - for prestigious late season matches.

Although some changes to the stands, turnstiles and crowd management arrangements were needed to reflect the standards required in the Football League, no additional work was needed to bring the pitch up to scratch, bar realigning the fencing in one corner to enlarge the run-off area.

The renovation window gets ever shorter, with the first fixtures at the end of July, and an early home League Cup match against Nottingham Forest on 13th August, but Dale was able to start mowing with the rotaries in June.

"Once the pitch is established, we mow three times a week with a Dennis G860, increasing in frequency during match preparation periods," he explains. "We double or quadruple cut and always mow with string for presentation. The blades are set a height of 25mm initially and then 30mm in the winter to protect the sward." 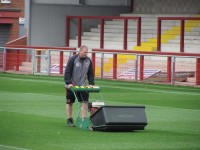 He praises the Dennis mower, commenting that it is ideal for smaller clubs as it can be used with maintenance cassettes as well as the mowing reel, avoiding the need for additional machines.

"We have a verticutting reel, and I use the brush a lot in the winter to stand up the sward for mowing and take out debris, although it needs some care as it can have a scarifying effect," he says.

"I'd love a second Dennis now that I have a full time assistant. We have a relatively small fleet of machinery, but I'm not keen to have tractors on the pitch anyway, so anything we buy would be pedestrian."

The one exception to this rule is a Verti-Drain, operated by Danvic every six weeks or so in the season to keep the surface open and get air into the rootzone.

"I'd like our own Verti-Drain and we may need more kit if we get our own training ground," Dale comments. "At the moment, we rent a pitch locally from Fylde Rugby Club, although we do maintain it ourselves."

Dale has taken on a full-time assistant, Nick Hyndman, who has recently completed his sports turf course at Myercough college, the same place where Dale studied. Coincidentally, the newly appointed apprentice, sixteen year old Ashley Roche, is just embarking on a similar course at the highly regarded college.

Dale himself is a local lad, having been brought up in neighbouring Blackpool - you can see the tower from the stadium - but was working on the other side of the world, preparing pitches for the World Cup in South Africa when the call came to say that a position at Fleetwood Town was available.

He won the FA's Conference Groundsman of the Year Award in 2011, having gained the approval from the judges - Tottenham's Darren Baldwin and West Ham's Dougie Robertson - and is undaunted by the extra attention the club, and its pitch, is likely to get in the Football League.

"I don't feel any pressure! It's great for the club to get national recognition and TV coverage; I can't wait to see Highbury on the BBC every other week and we will get the odd game on Sky. I'm looking forward to the chance to show the club off."