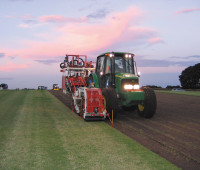 Horse Racing in Australia is a major part of the country's Turfgrass Industry. In the state of Victoria alone there are 69 grass tracks and premier amongst them is the famous Flemington, nestled close to the city of Melbourne.

Flemington hosts a four day racing carnival each spring with the major event being the Melbourne Cup. First run in 1861 'The Cup', as it is affectionately known, has been run on the first Tuesday in November ever since. The enormity and tradition of the event is evidenced by the Government granting a public holiday each year for the residents of Melbourne to mark the race that stops the nation. Australia comes to a standstill, including its Federal Parliament, as it listens to and watches the Cup.

Attendance for the Melbourne Cup usually exceeds 100,000, with almost 400,000 attending the four day racing extravaganza spread over a week. In recent years international trainers have tried their luck against the antipodean equine stars with only three being lucky enough to greet the judge in first place, including the 2006 winner from Japan, Delta Blues.

Following the 145th running of the Cup in November 2006, the Victoria Racing Club embarked upon the first major track reconstruction of Flemington since the course was changed to its current shape in 1859.

The track reconstruction was just part of an overall revamp to the course that included the building of new horse stalls, a tunnel to connect the parade ring to the mounting yard and a flood wall to protect the track from any flooding of the Maribyrnong River that runs alongside the back of the course. In May 1974 the course was completely under water and horses that were stabled at the track had to be hastily relocated to a nearby bloodstock agent's stable facility until the flood subsided. 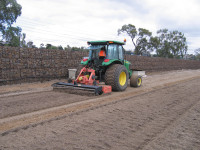 The A$10 million track reconstruction commenced with a road profiler stripping the top off the old track down to a depth of 500mm. A new base was then created by using some of the old sand combined with lime and cement to provide a firm base.

The old track had a crown in the centre of the straight six furlong chute providing some drainage, and this has been changed to a one way crossfall. Terry Watson, the track manager, believes that Straight Six races (1200metres) will now have even racing for horses drawn inside or outside as all parts of the track will have consistent going. In addition cambers have been added to the turns, and the track has also been raised to aid drainage.

Consultants, Cardno Young, designed the new track which has over 25km of agricultural drains running across it. These feed into a drain that has a pumped storm water system attached. The previous system relied on gravity and the course was at the mercy of the river level to drain in the event of flooding. The new drainage system, coupled with the flood wall, has effectively flood proofed the track and will ensure racing can continue in any weather.

100mm of gravel was laid over the drains by the construction contractor, Akron, and a 300mm layer of manufactured sand spread over this. The sand was manufactured to a specification provided by the VRC combining the key factors of drainage and stability in the design.

Following consolidation and levelling of the growing medium, amendments were incorporated into the top 100mm of the topsoil by Anco Turf who were contracted to grow the 124,000 square metres of turf for the track.

The turfing stage of the reconstruction began back in 2002 when the VRC awarded the contract to grow and lay the track turf to Anco. The contract also included a four week clause to maintain the turf after laying. The turf was grown on free draining sand which was tested for drainage and particle size distribution at Anco's Torquay farm, south of Geelong, prior to awarding the contract.

The paddocks were fumigated before planting with Kikuyu (Pennisetum clandestinum) and then overseeded in September 2006 with a blend of three Perennial ryegrasses (Lolium perenne) and Kentucky Bluegrass (Poa pratensis).

In August 2006 Anco ran its Field Topmaker over the paddocks to remove any thatch and vegetative material that had accumulated. This left a level surface with Kikuyu stolons and rhizomes still present prior to the overseeding process with the Bluegrass and Ryegrass.

The paddocks were constantly monitored throughout for disease and nematodes, ensuring the quality of turf would be optimum for harvesting. The VRC, along with Cardno Young, visited the Anco farm on a regular basis to inspect the progress of the turf. 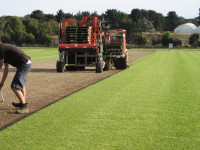 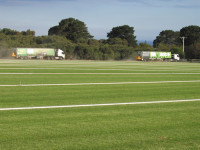 The 124,000m2 of track were laid in five stages of various quantities commencing with a 36,000m2 section that was hand laid in four days with conventional size rolls of turf. The whole job took from February 14, finishing on March 19, all by hand with up to 10,000 rolls laid per day. Work on the inside training tracks meant that turf could only be laid after 8.30 am and deliveries of fresh turf had to be scheduled to arrive before and after trackwork. During the four weeks of laying the temperature exceeded 30degrees Celsius on several occasions.

It was critical to lay the turf as soon as possible after harvest so we harvested late afternoons and into the night for the morning laying sections and then followed up with morning harvests for the afternoon laying shift. This ensured that the turf was laid in good condition and was never more than 14 hours old. Rolls of turf in the centre of the pallet can get very warm and cook in our summer conditions if not laid promptly. Our harvest timing ensured that very few rolls were damaged and our loss ratio was insignificant.

After each day's laying we installed temporary irrigation using our 50mm aluminium piping transported from the Torquay farm. Over 10 kilometres of piping was laid over the track in three rows. This provided an even irrigation pattern ensuring good establishment of all areas. The piping system was manual and required up to 16 hours of track monitoring per day due to the hot conditions that prevailed.

Root growth was rapid with 2-3cm extension in just five days from laying. After one week the turf had pegged down to the extent that it could not be lifted without force. An application of a high N fertiliser was applied to each section during the maintenance period before handover to the VRC. Flemington's own Upton irrigator was used following the removal of the temporary irrigation system. 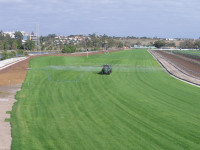 The VRC will be developing a nursery using the same growing material contained in the track overlaid with turf from Anco. This will be used for any repair work to ensure a uniform racing surface is maintained. The uniformity of the track soil profile, drainage layer and turf composition will allow one maintenance programme to be used for the entire track.

Terry Watson and his team kept a watchful eye on all phases of the construction and, by his own admission, "probably went overboard with detail". However, this intense supervision of the project by all parties has resulted in a state of the art track manufactured to exacting standards. Terry believes that no matter what barrier a horse is drawn in, it will win if good enough, as the track going should be even across its width.

The decision by the VRC to tear up and build a new track and facilities in time to hold the 2007 Southern hemisphere Spring Carnival was bold to say the least. The planning and project supervision has ensured that the track will be ready in time for the first meeting to be held in September this year.

We look forward to welcoming yet another contingent of UK horses, and riders, attempting to take our Cup back to the mother country for only the third time in its 145 year history.