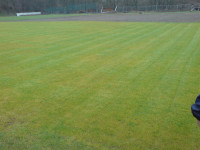 For the most part, I feel privileged to be working in our industry. Although I'd worked in Premiership football, I had no idea that turf, and the art of Groundsmanship, was so fascinating. During the last six years, I've learned an enormous amount and met some amazing people. In my opinion, our industry is full of warm, friendly, sociable, caring people with a passion for their profession. So, when a story was posted on the Pitchcare message board after the floods in June, I hoped the industry, that I rave about to my somewhat baffled friends and family, would come up trumps. And it did. Here's the story…

At the beginning of July, Andy Matthews posted photos of his former cricket club, Oughtibridge, on the message board. Playing in the South Yorkshire Premier League, the club ground is situated in a usually tranquil setting beside the River Don. After hour upon hour of torrential rain during the last week in June the river, which runs along two sides of the ground, burst its banks.

The torrent of water washed the asphalt access road to the ground away, and left 150 tonnes of rocks and boulders strewn across the cricket and football pitches. The floodwater hit the back of the pavilion and surged around the wooden outbuilding, housing the outfield triple, causing it to collapse. The steel container housing a 2-tonne roller and the remainder of the grounds machinery had been shifted by the sheer force of the water, leaving a hole twenty feet wide and eight feet deep in the car park. 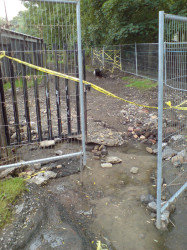 The site drained quickly but it was clear to see that entire ground was devastated. Groundsman Roger Fairhurst, a good friend of Andy's, was in the pavilion when the river breeched.

As I watched the news reports from the area showing homes, businesses and infrastructure overwhelmed, TV cameras showed unbelievable pictures from Worcestershire County Cricket Club and Sheffield Wednesday. I knew that if big clubs were struggling to get back on track, the likelihood was that many smaller clubs could have been wiped out.

I rang Roger at Oughtibridge to find out how they were coping. He said that, over the next two weekends, villagers and club supporters had gathered at the ground with wheelbarrows and had managed to clear the majority of the rubble from the outfield and football pitch. It was clear that this wasn't a club intent on feeling sorry for itself.

Sports clubs can be at the very heart of village life, bringing together people of all ages and galvanising communities. Clubs that size have little or no money and the majority are maintained by volunteer Groundsmen who give up much of their time freely to ensure that sport can be played.

Pitchcare was conceived to help Groundsmen and Greenkeepers share information. We knew the Groundsmen at those flood-affected clubs would need advice and assistance and felt compelled to help, and hoped the industry would too.

Before we extended any offer of help, I put a call in to ECB pitch advisor for the South Yorkshire area, Allan Kettleborough. Allan knew the club and the Groundsman well and kindly agreed to visit the site and write a pitch report.


Needless to say it didn't make for good reading, especially for the club who, by now, had cancelled all their cricket fixtures for the remainder of the season and, with the clubhouse ruined, the whole winter sports agenda as well. The only saving grace was that it was river water rather than sewage that had f 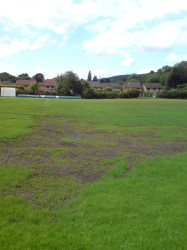 looded the pitch, meaning that, although there was a lot of sediment, there was no harmful bacteria in it.

Once Allan had explained what work needed to be carried out, we set about trying to find companies who would be able to help, before making our offer of assistance to the club chairman.

We were lucky enough to get good responses from suppliers and contractors, willing to provide their goods and services for free to help the cricket club get back on track.

As I write this article in March, the poor weather has hampered the progress of work and, although most has been completed, it may be another 6-8 weeks before play can be resumed.

I will be writing a more technical article of works for the June/July edition, which by then should have seen a successful resumption of play at Oughtibridge CC.

In the meantime I, Pitchcare and Oughtibridge Cricket Club would like to extend a very warm and generous thank you to Allan Kettleborough - ECB Pitch Advisor for his expert advice and knowledge. British Seed Houses - for the donation of 9 bags of A5 Cricket & Tennis Renovation cricket mixture and 10 bags of A7 Olympic Sports Ground for the football pitch/outfield. GSB Loams - for the free supply of 12 tonnes of County Loam, which was used to re-dress and level the square. Oliver Warriner - a local contractor who carried out all the remedial work on the cricket square. Premier Pitches - for Verti-draining the football pitch and cricket outfield, brushing and over seeding.