by Samantha Yule
in Schools & Colleges, Rugby, Football, and Synthetics
on 12 Jan 2016 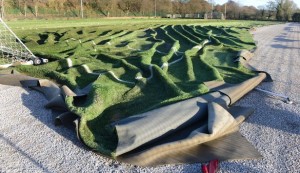 The pressure of 5ft of water caused the rugby super-pitch to ripple when a nearby river burst its banks.

Currents created channels in the AstroTurf at Woodhouse Grove public and boarding school, creating a sand-like effect as the floodwaters peaked on Boxing Day .

Adrian Sweeney, head of rugby at the school in Apperley Bridge, Bradford, West Yorks, said: "There is a wall at the side of the pitch, so when the River Aire has breached it seems to have flooded onto the pitch and created a wave effect as the water has been splashed back from the wall."

Amazingly, the pitch was only created three years ago, and it was built higher than usual with flood defences in mind.
But this year waters rose a staggering 4ft higher than normal.

Local League One football team Bradford City had recently been training on the pitch and the goalposts had also been uprooted by the water and were floating around the "lake".

Mr Sweeney said: "We are talking tens of thousands of pounds to restore this pitch.

"It is a massive blow to our training. It's a big inconvenience. Our teams are doing really well, there are three teams in the National Cup Competition.

"We will have to find a way to train until we are back up and running."

For the full article, visit www.mirror.co.uk.