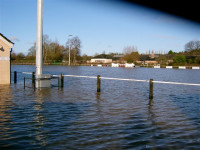 The current heavy rainfall is certainly taking its toll, the daily deluge is affecting the condition of many pitches. With so much water now falling onto the ground pitches are becoming saturated and flooded.

59 flood warnings have been issued by the Environment Agency today, so there is likely to be some significant flooding taking place in the next few days as the rains continue, no doubt causing a lot of damage to club grounds and facilities.

One such club that has already suffered is Malmesbury Victoria, based in Wiltshire. Within hours of receiving a flood alert their ground was covered with water and leaking into the clubhouse facilities.

The club's chairman, Paul Neale, was alerted of a likely flood at 2.00am on Tuesday, January the 9th. By 8.00am the ground was covered with 5 feet of floodwater from the nearby river Avon.

Due to the very short notice, and timing, of the alert the club were not sufficiently prepared to move and protect furniture and equipment. If that wasn't bad enough, since the last flood, some eight years ago, they have not being able to get any insurance against flood damage, so they will incur the costs of the damage themselves. 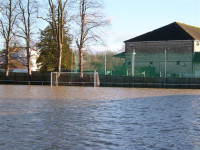 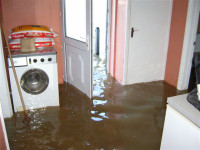 The cost of the flood damage will run into thousands of pounds. In addition the pitch is likely to be unplayable for a number of weeks and will result in further loss of income due to cancelled fixtures. 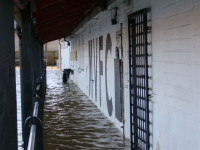 Paul is confident that once the floodwater has receded the pitch will drain quickly, with the help of the new drainage system the club had installed last year.

It would be interesting to hear of any other clubs who have also been affected, or are likely to be affected, by floodwater damage. Even without the threat of floods, there will be many clubs who will be, or should be, cancelling games to protect their pitches. Playing on saturated pitch is a recipe for disaster; it will lead to surface damage, loss of grass cover and ultimately increase the risk of player injury.