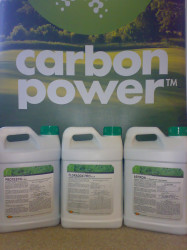 A foliar feed package consisting of Astron to promote rooting and generate energy, Floradox Pro, which improves the plant's immune system and also helps rooting, and ProteSyn, which aids photosynthesis, this new TAP has produced strong results during field use in both the U.K. and abroad.

David Snowden, Floratine's Technical Director says that with very few means of eradicating nematodes (previously applied chemicals are now illegal) and less severe winters (frost drives the creatures deeper into the subsoil where they do less harm), the answer is to build plant strength enabling the sward to out compete its microscopic predators.

"Nematodes prevalent in a sports turf situation attack the root system of the grass plant," he says. "What we're able to do by feeding through the leaves is give unaffected plants the strength they need to ward off attack in the first place, and those who have already been damaged the ability to recover and fight off secondary infection."

For further information on Floratine's new Anti Nematode TAP, contact either David Snowden at dpsfpg@aol.com or Conor O'Neil on conor@floratine.com or visit the Floratine website at: www.floratine.com/