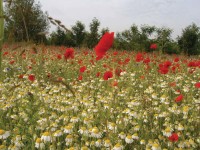 The National Memorial Arboretum was established in 1997 on a former sand and gravel workings near Lichfield and within the National Forest in Staffordshire. The 60 hectare site has since become a focal point for remembrance.

It contains more than 50,000 trees and a number of memorials to the armed forces, civil services, charities and organisations. This summer, visitors have been greeted with the sight of a vibrant floral display, thanks to a special wild flora seed mixture supplied by British Seed Houses.

The mixture, specified with an emphasis on the colour red, contained corn poppies, corn cockles and red campions. Blue cornflowers were added, as they're the French nation's adopted symbol of remembrance, and yellow corn marigolds and corn chamomile completed the blend to prolong the bright and cheery display.

In the UK, the red corn poppy is the symbol of wartime remembrance, because it was one of the only plants that grew on the World War I battlefields. They are abundant across Europe, thriving in disturbed soil and blooming mid-summer.

Richard Brown from BSH visited the site in Spring 2006 and was shown a swathe of bare land to the north where a gas pipeline runs. Two rows of mature trees had been planted along the perimeter but, because the land cannot be put to use, the decision was taken to create a poppy meadow. 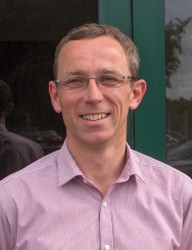 The first seed was sown that autumn, and again in 2007, with British Seed Houses providing advice and support to ensure that the area was maintained appropriately.

Arboretum Curator, Paul Kennedy, explained why the meadow was created: "We asked BSH to supply a special mixture containing poppies and cornflowers to help us create a vibrant new habitat on a redundant piece of land. The advice we've been given on maintaining the area has been invaluable and we've enjoyed a glorious summer bloom this year."

The variety of habitats at the Arboretum site illustrate the biodiversity of the area. They include emerging woodland, hay meadows, riverbank and marsh, each with its own flora and fauna. Birds and animals include several species highlighted in the Staffordshire Biodiversity Action Plan such as the skylark, lapwing, brown hare, otter and several species of bat.

To help in selecting mixtures which are appropriate for a particular location, BSH categorises the country using grid references based on the National Vegetation Classification Survey which was originally commissioned in 1975. It aims to preserve the heritage of our natural grass and flora habitats and recognises specific communities. As a result, BSH know where the seeds come from and which plants are found in which locations.

They offer two wild flower seed ranges which have been developed to complement the UK's natural habitats, many including native grasses. The WF range is based on mixtures for different soil types and includes two Irish, two Scottish and one Welsh mixture. The Regional Environmental (RE) range splits plants into regional groupings, with the mixtures based on the most common species found in an area. There's an option to add more rare species if desired.

Appropriate maintenance is the key to success 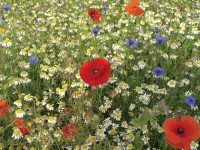 Simon Taylor, Amenity Director at BSH, says that understanding how wild flower areas should be maintained is the key to success after seeding: "When people don't get the results they were hoping for from a wild flower area, it is largely due to a lack of understanding about what the plants and habitat require."

"Cornfield annuals require an annual disturbance of the soil to regenerate the seed that has been shed from the previous plants. Annuals only have one generation and rely on the next being borne from new seed. Annuals are associated with traditional British agriculture, of cultivating the land each year to grow cereals from which these species were once prevalent. These days better weed control means they are not seen as often."

"Wild flowers containing perennial species need different maintenance. They regenerate from their root system or overwinter as a visible plant. They don't require annual cultivation and spread via their roots and by seed that finds the right growing conditions.

These mixtures require a bi-annual cutting programme - one in early spring (end of March), if it has been a particularly mild winter, and one

cut in mid to late September. In all instances, the cuttings should be removed to prevent a mulch building up on the surface which will eventually kill out the less vigorous species and form a rank grassland. It is the competition of the grasses that you are trying to keep at bay to allow the broad leaved wild flower species to survive."


If you would like help with a wild flower project, British Seed Houses technical advisors can assist by producing a regional specification and offering practical management advice. Their 2008 wild flower catalogue is available to download from www.bshamenity.com or by calling 01522 868714.


Pitchcare's range of wildflower seeds has increased dramatically since this article was published. Visit the Pitchcare Shop for more information.