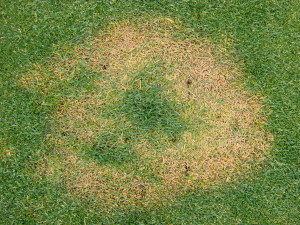 We're heading into a period of the year when disease pressure is generally high, particularly Microdochium nivale, otherwise known as Fusarium patch, therefore it seems appropriate to review the techniques used to control Fusarium.

Many golf greens are composed of a high proportion of Annual Meadow-grass enabling the Fusarium to spread uninterrupted which can lead to the surface going into the wintertime in poor putting condition and improvement is likely to be slow. This has historically been one of the main concerns for green keepers.

Fusarium starts in the autumn as small orange to red-brown circular spots 1-2 cm in diameter. When the fungus is particularly active, the patches have a brown ring at the outer edge. The centre of the patches may become pale brown/yellow. White/pink mycelium may be observed on the outer edge of the patch matting the infected leaves together, this is often used as an indication of high activity.

In the spring, fungal activity first starts at the edge of the Fusarium scars. If cool, wet weather conditions persist in the spring, new patches may occur. Because spores and fungal mycelia are spread by water, machinery and foot traffic, Fusarium can appear in streaks or even linear patterns as the fungus is carried by surface drainage, footprints or wheels.

Fusarium is naturally present in soil and thatch as spores and mycelium even during the summer although it is not active at temperatures exceeding 20°C or when there is insufficient moisture. Like most fungi it requires suitable conditions before it starts to germinate or spread and damage other grass plants. Mycelium spread into adjacent plants or spores are carried on the wind or in moisture.

These conditions are generally met in the autumn although if summer temperatures become cool and sufficient moisture is available this can trigger Fusarium at any time.

Filling the niche that could potentially be occupied by Annual Meadow-grass is the most effective means of reducing Fusarium. Over-seeding with species such as Bents or Fescue is commonly undertaken in the autumn to break up the dominance of Annual Meadow-grass.

Implementing fertiliser and aeration programmes that favour species such as Bents and Fescues is necessary in order to ensure they are favoured over Annual Meadow-grass.

Fusarium initially attacks the exterior cells of the grass plant; older plants growth contains more lignin and is less vulnerable to Fusarium, whereas young growth is more susceptible. This has implications for timing of fertiliser applications to minimise flushes of growth when the disease pressure is high.

When approaching autumn it is advisable to use slow release forms of fertiliser. Routine and sequential applications of phosphite, as part of an integrated disease management programme, significantly reduces the incidence and severity of the disease. This alternative to the use of iron as a turf hardener is becoming more popular. Use iron prudently to harden plant cells off and make them less susceptible to disease.

Though care must be taken when applying iron in the form of iron sulphate, as swards that are dominated by Annual Meadow-grass tend to have received an abundance of fertilisers that contain a high proportion of ammonium sulphate. High levels of sulphur can lead to 'black layer'. Black layer is a deposit of metal sulphides caused by the activity of anaerobic bacteria. The anaerobic bacteria produce hydrogen sulphide which is highly toxic to turf.

Because Fusarium can survive within the thatch layer, it is good cultural practice to minimise this layer through aeration. Monitor thatch levels and aerate to achieve desired levels of oxygen within the sward. Air flow over the turf can also help reduce the incidence of disease. Drainage will help facilitate the flow of moisture away from the surface.

Regular top-dressing can help dilute existing thatch levels however heavy applications of top dressing are to be avoided as this can engender stress which can lead to an outbreak of Fusarium.

A large array of fungicides has historically been used although this armoury has been reduced in recent years as products have been taken off the marketplace. There has also been an increase in disease resistance due to the over reliance upon specific groups of fungicides. Therefore it is useful to adopt a strategic approach when utilising fungicides to derive the best use for what is a relatively expensive resource.

Consider utilising good cultural practice to minimise reliance upon herbicides, the code of practice states that you should 'ask yourself whether you need to use a pesticide or whether there is another method of control or combination of methods you could use.' Appropriate use of the correct fungicide at the most effective time will minimise the potential damage done by Fusarium. Fungicides target Fusarium at different stages and use different modes of action.

The practice of mixing different fungicides together to improve efficacy is a subject that deserves separate consideration. Suffice to say that pesticide labels aren't merely guidance but a legal document. It is an offence not to follow the statutory conditions of use of a pesticide. Broadly fungicides can be categorised in the following way:

These operate within the plant using various different modes of action. Preventative fungicides would include: Heritage Maxx, Instrata, Banner Maxx, Dedicate and Throttle. Medallion is a fungicide that unusually targets the presence of Fusarium on the leaf, in the thatch and in the top of the soil and therefore can be used to break the cycle at many points. 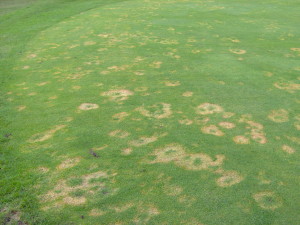 A curative fungicide is a fungicide that whose specific mode of action makes it particularly effective at arresting the progress of the disease quickly. Fungicides applied when the first symptoms of disease are evident have been shown to be more effective in disease control than allowing the disease to become established.

Treating effectively with an appropriate fungicide will reduce the potential for future outbreaks and limit the need for further applications. Curative fungicides would include: Interface, Chipco Green and Medallion.

Preventative and Curative
Some fungicides provide a blend of active ingredients and therefore can be viewed as both a preventative and a curative. These include the following fungicides: Instrata, Banner Maxx, Dedicate and Throttle.

For advice on phosphate, iron or turf fungicides contact our technical team on 01902 440250.