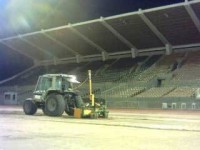 Saudi Arabia has 60 "league" football pitches, Government-owned under the General Presidency of Youth Welfare (GPYW). Most of these are maintained by four major contractors on a day-to-day basis. Annual Maintenance is usually carried out in April/May/June and involves stripping the thatch layer, verticutting, aerating, core removal, top-dressing - a process that is labour-intensive and can take several weeks. The continued top-dress over the years has resulted in many pitches, usually with artificial-surface athletics tracks around them, increasing in height so that a number have turf surfaces several inches above the running-track level.

Over the last year, many of these pitches have been surveyed by my company, Turf Technology Middle-East (a consortium of suppliers for the major turf-equipment brands) and, as result, one of the major well known maintenance contractors, Saudi Building Technic Maintenance (SBTMC) have awarded us a contract to level the two pitches at King Fahad Sports City in Taif, which is about 100km inland from the Red Sea port of Jeddah.

The pitches were originally built with a "crown" shape, and the profile had been distorted over many years, with high areas behind and at the sides of the goals, and other areas nearer the centre of the pitch that been lowered by play. Top-dressing and redistribution of the field material had also raised the sides of the pitch to as much as 8 cm in places. The GPYW had asked that these raised edges be removed during the operation to renovate the pitch.

The pitches were built with a sub-surface irrigation system, but the available water TDS and the lack of regular rain caused the salts in the soil to build up with this type of irrigation, so it was decided to incorporate a new sprinkler system at this time. It was also decided to take this opportunity to change the turf from Common Bermuda to Tiffway 409. Pitches were also to be levelled to remove what was left of the remaining "crown", as well as the high areas which had developed over the years. 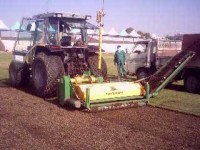 After installation of the new irrigation system, Turf-Tech applied a "final grade" to the site, ready for the new sod to be laid.

SBTMC have also signed a contract with Turf Technology Middle-East, to carry our the annual renovation of all of the soccer fields under their care.

Under this contract, Turf-Tech will visit each site during May-July of the renovation period and will use the Koro Field TopMaker to de-thatch and skim off any local high spots, and then the Koro Recycling Topdresser to thoroughly aerate the pitch and, at the same time, bring material from below the surface to use as top-dressing (no more "pitch build-up").

The aeration provided by the Koro RD is around 10 times more extensive than conventional coring-tine machines and using existing material for top-dressing eliminates the problems of "pitch build-up", as well as the risk of weed and disease in top-dress material, and the cost of the new material (yes, we have to PAY for sand in Saudi Arabia!).

In addition, the soccer fields will also be visited in the Autumn and the Koro RD will again be employed to reduce the compaction caused by the heavy playing schedule. The resulting top-dress is spread evenly over the surface and although the Koro RD is impressive in the way it thoroughly decompacts the pitch, the pitch is out of play for only a day or two.

Other turf maintenance companies in Saudi Arabia, as well as Bahrain, Qatar and the UAE, are showing an interest in this revolutionary new method (to the region) of pitch care with a view to improving the standards of playing surfaces in the Middle-East.

Saudi ARAMCO have also requested that a similar treatment be given to some of their recreational soccer fields at Tanajeeb and Ras-Tanura, in Saudi Arabia, in the next few months.

We have just been awarded another contract to use the Koro "RD" to decompact and top-dress the 36 fairways at Abu-Dhabi Golf Course, during late July and August, as well as possibly working on the tee-boxes, greens, and the driving range. During this time we will be having an "open house" for Golf Superintendants to see the Koro system in action and to answer their questions on its advantages.

All-in-all, this Summer is going to be a very busy time for the operators of our Koro systems (already planning 2-shift floodlight working) as we are developing more work in Qatar and Oman, as well as purchasing our own equipment transport trucks to eliminate the requirement of relying on local "low-loaders" to get us from customer to customer in the busy Summer season.