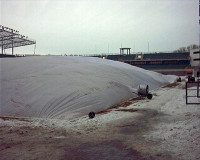 A Dutch company have patented a new weather protection cover for pitches. The product called Dutchdome has been generating a lot of interest from Eastern European Football Clubs. The Estonian Football Federation last year agreed for the cover to be used at the Tallin's Stadium when the under soil heating system failed to prevent frost penetrating 30 cm deep.

Dutchdome took along their cover, erecting it in two hours using three men. It was left on the pitch for three days after which time the pitch had thawed out and was ready for play. After the match the cover was replaced to ensure the next game, against Russia, could be held. Temperatures were constantly under freezing point during the day and fell to below -10 on the night. The cover proved invaluable in that it ensured the game against Russia went ahead.

Soccer clubs are regularly forced to cancel a match because of excessive rain, snow or frost. Dutchdome protects the field during a few hours or days before the beginning of the match with a semi-transparent cover. The light-weight cover is easy to install and remove. Air is blown through two openings in the cover using fans, Once inflated the dome protects the pitch from adverse weather conditions and at the same time ventilates the grass surface.

Facts about the Dutch Dome: 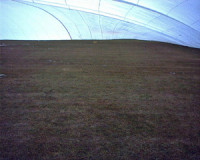