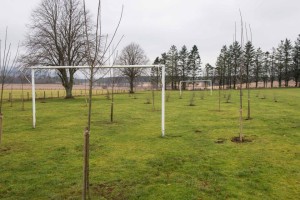 Bungling council workers who planted trees right in the middle of a kids' football pitch have sparked hilarity on social media.

Dozens of saplings have appeared all over the grassy field in the village of Logie Durno near Inverurie in Aberdeenshire.

The sports area is often used by young children living in the area during the summer months. But it looks like they will now need to perfect their dribbling skills to get the ball past all the new obstacles to reach the goalposts at either end.

Hundreds of people reacted to the photograph when it was posted on Facebook last weekend. And one social media user described the new planting scheme as "barking mad".

Another local resident asked: "Why? And surely, if they were planting trees, taking the goal posts out before planting would've been better. What on earth possessed them to plant trees in a football pitch? And what is this carry on going to cost?"

It is not yet clear who planted the saplings or who owns the land in the small village.

But some residents queried whether it was the council to blame and if they were just trying to be helpful by "turning over a new leaf".

You can read the original article from The Scottish Sun here.