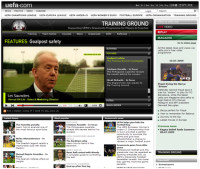 When playing a football match, what are the most important considerations?

What it means to win or lose?

The goalposts, whilst vital to the game, are often the last thing to be considered. Due to their size and weight an unsafe pair of goal posts can potentially be dangerous, and it is this issue that a new UEFA video has been filmed to highlight.

Running on the Training Ground section of the UEFA website (the area aimed at supporting UEFA's grassroots programme for players and coaches), the 8 minute video was shot at Ipswich Town Football Club and features top industry figures discussing the issue of goal post safety in detail.

Sales & Marketing Director Les Saunders and Design Manager Mark Smith from leading sports equipment manufacturer Harrod UK Ltd helped UEFA co-ordinate the video and were pleased to be involved in the filming. Harrod UK has a track record of campaigning for goal post safety awareness for over 20 years and were a natural choice for inclusion in the film.

"Since the F.A started their goal post safety campaign back in 2002, there has definitely been much more awareness of goal post safety issues, but the point still needs to be driven home" explains Les. "The UEFA video revitalises the campaign on such important, but all too often neglected, issues."