0 Ford Prison, at Her Majesty’s Leisure

Driving out into the West Sussex countryside south of Arundel, you may be surprised to see pedestrians crowding across the road where no houses or shops exist.

Almost unannounced, you have come upon HMP Ford prison and here they do things differently from most other institutions. For HMP Ford is a category D, low-risk prison, which spreads over 100 acres across both sides of the road running south of the picturesque tourist haunt of Arundel to the seaside town of Littlehampton, West Sussex.

Although positioned in a flood plain of the river Arun, in what is a little-known region of the country, Ford gained renown - and not a little notoriety - as one of Britain's most famous open prisons, because of its once 'celebrity list' of offenders, whose very presence brought the paparazzi flocking.

The pedestrians are, in fact, offenders wending their way back to their accommodation after working on the east side of the prison, where the horticultural glasshouses, among a host of other facilities that Ford runs, are sited. Ford has the space to make a fuss of its acres, and does so, managing a wealth of horticultural as well as sporting amenities.

It's July, and the prison grounds are ablaze with colour, thanks to the thousands of annuals that grace the bedding areas, entrances and verges.
Lining the eastern entrance is a block of vivid pink pelargonium annuals, worthy of decorating any establishment and an entry to Britain in Bloom. On the western side, herbaceous borders and more shocking pink blooms cheer visitors, even on the bleakest of grey days.

Clearly, a sense of pride permeates Ford, and the quality of the green spaces testifies to the attention to detail taken by the grounds maintenance team.
The function is not a contracted-out one, however. Everything on view is the handiwork of prison staff and offenders - it's all their own doing, completed under the watchful eyes of grounds maintenance supervisor Ray Moss.

In charge of the daily routine at Ford, which usually accommodates some 550 offenders, Ray has worked here for fifteen years, honing his skills at managing manpower that is constantly changing as the daily demands of other aspects of prison life come into play. "You need to have strong people skills to do what we do here," he stresses.

After such a lengthy time in post, he surely runs the operation like clockwork? Not so, insists Ray. Due to the nature of prison duties and requirements, he will only know at the last minute how the structure of his working day will pan out - seemingly no easy task then but one that he bears with an easy stoicism.
"There's no such thing as a typical day here," he says. "My workforce is the contingent of offenders that come in each day for work - and with ten new recruits a week coming into the work pool, there are always new faces and personalities to contend with. But that's how it is. My task is to organise the duties of the day with the manpower to hand," he adds modestly.

Many disruptions to the day's schedule lie in wait to thwart Ray's best intentions - random drug tests, family visits or day release and resettlement visits to name a few. As he says: "The offenders dictate the work of the staff." And those staff members, like Ray, can boast extensive experience in horticulture and groundsmanship - at least 20 years each in most cases, so there's a wealth of know-how on site to impart to the work teams.

Only after Ray knows how big his team is can he begin his day and put a working structure to it. Even then, the various necessities of prison life make the 'average' day far from average - the need to keep an accurate record of everything that happens, for example, and to keep a tight record of all the tools that are handed out to offenders: a routine required at the start of the day, at lunch breaks and at the close.

Every day is different

The offenders working day begins at 8.15am, with typically a team of twelve, Ray explains. "Breaks for lunch are extended to allow for recording tools and roll call duty. The day usually finishes at around 4.40pm, when we repeat the same process."

Despite prison routine taking up so much of the day, Ray can feel justifiably proud of his team's achievements out on site. Ford, a former air base operating under the Fleet Air Arm in the 1950s, runs a host of revenue-earning enterprises as well as handling day-to-day site maintenance that keeps the grounds looking pin sharp. 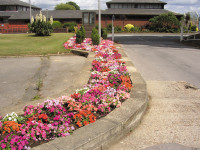 The nursery cultivates many of the plants available from commercial counterparts, and there's a market garden and an arborium, the latter Ray's pride and joy.

Ford's horticulture and grounds maintenance operation involves some ninety offenders in total as well as the long-standing team of specialist staff that have cut their teeth here.

Many of the offenders are in resettlement, Ray explains, where they are being prepared for release back into society. Some will become horticulturalists in their own right. What is certain is that Ford's primary aim is to encourage the skills necessary for offenders to survive and thrive once they are released.

"This is nobody's first prison," says Jason Errington, Ford's Farm Manager. "We try to provide the offenders with the work skills they need to return to society ready for the challenges that lie ahead." The horticultural operations at Ford are vital for two reasons, he explains. "First, they provide an invaluable skills base for offenders and second, they generate revenue. We tender for contracts just like any other commercial operation."

Everybody has a job to do at Ford - there are no idle hands - in part thanks to a thriving education programme offering a diverse range of job skills for offenders, in order to ready them for work. "It's all about getting them back into society," says Jason.

Proof of Ford's strong focus on skills and education is seen in the shape of Northbrook College, which has its own branch in the prison grounds, overlooking the cricket square. A number of government agencies also work alongside Ford to help offenders get back into work once they are released.
Ford concentrates on National Proficiency Test Certificates (NPTC) and horticultural crafts that give offenders skills such as strimming and tractor driving, Errington explains.

And Ray himself is an NVQ assessor at levels 1 and 2. "We are measured on the quality of the qualification we deliver," he comments when questioned on how important he sees the qualifications offered at Ford.

"Perhaps a gauge of that delivery is the good number that find work within the horticultural sector, with some even going as far as establishing successful businesses within the industry."

"We look on each offender as an individual and make no generalisations, but we have to be adept at handling people and be a good judge of character, assessing people quickly and knowing who is trustworthy when doing particular jobs - for example driving one of our tractors, or using any of the prison's strimmers and mowers."

However, Ray does not see himself taking a parental role and, for the most part, offenders are left to complete work unsupervised, although as he comments, "You can tell if the work hasn't been done". That said, the work is usually undertaken "with considerable pride and care", and offenders can often be "very protective" of what they do.

Key to the operations at Ford is the emphasis that staff place on the 'normality' of life there. "What happens in Ford is what happens in the real world," Jason emphasises.

"There are people from all walks of life here, just as in society as a whole," Ray adds. "But the necessity of work is paramount because, in most cases, Ford is the last stop before the offender is released back into society. Therefore, life here needs to operate on a similar level as outside as reintegration back into society through having the necessary skills is vital."

A fact that also applies to the facilities available on site, Ray continues. "Offenders find their own level. Those who have interests in sport will interact and associate with like minds, just as they would on the outside."

Jason adds: "After all, they are just people, who like to play football or cricket or bowls."

Ford commands a fine selection of facilities for the offenders to use when they are not occupied with the many other prison duties under Ray's management. Two full-size football pitches lie beyond the accommodation areas - one of which was laid by Ray himself - a seven-a-side Astroturf enclosure is sited next to the immaculately manicured cricket square while, nearby, lies arguably Ford's crowning glory - its bowling green, snuggling among some fine shrubbery, while round the corner the natural turf tennis court stands ready for action, bordered by the beginnings of a rare collection of Buddleia, conceived and nurtured by Ray. 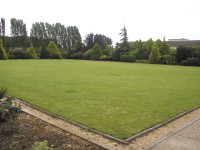 Use of pesticides and herbicides is limited being applied to the football pitches by machine, while the cricket square and bowling green (which was laid directly on to a clinker substrate) receive a general-purpose, quick-release fertiliser.

Despite the level of freedom given to offenders during the working day, some tasks are 'off limits'. "Any spraying is done by staff, none by offenders, and the bowling green is always hand-sprayed."

"The prevalence of spraying has fallen in recent years, on health and safety and environmental grounds and we are moving in that direction too. Ford hasn't sprayed broad leaf insecticide in four years now and we have stopped spraying selective weedkillers altogether. No spraying is done on the football pitches either."

The real problem for Ray though does not lie with weeds, but with rabbits. Signs of them are everywhere. "The rabbit population far outweighs the offender population. They are the only residents who live here by choice," Ray jokes.

"Feral cats are employed to patrol the grounds, but to little avail."

Other measures have brought only limited success. "We brought in a pest control firm but they are fighting a losing battle, as no further action can feasibly be taken. Any thoughts of shooting rabbits, or the moles that also cohabit the grounds, are quickly dispelled. As Ray says: "You have to respect people's wishes - you can't just go around shooting things willy nilly." A notion perhaps especially true in an open prison environment.

Given the pressure on prisons to release offenders early in a bid to stem chronic overcrowding Ford, for one, is certainly doing its fair share to develop a skilled 'workforce' who can contribute immediately, not only to the economy of the country but also to their own livelihood and to the stock of groundsmen qualified to help maintain our sports acres in prime condition.