by Football Foundation
in Football and Synthetics
on 20 Jul 2018

Kevin Davies, Bolton Wanderers all-time Premier League leading goalscorer was on-hand to officially open a third generation (3G) artificial grass pitch (AGP) for Ladybridge High School recently (Wednesday 11 July). The new facility was made possible thanks to investment from Bolton Council and the Premier League & The FA Facilities Fund, which is delivered by the Football Foundation. 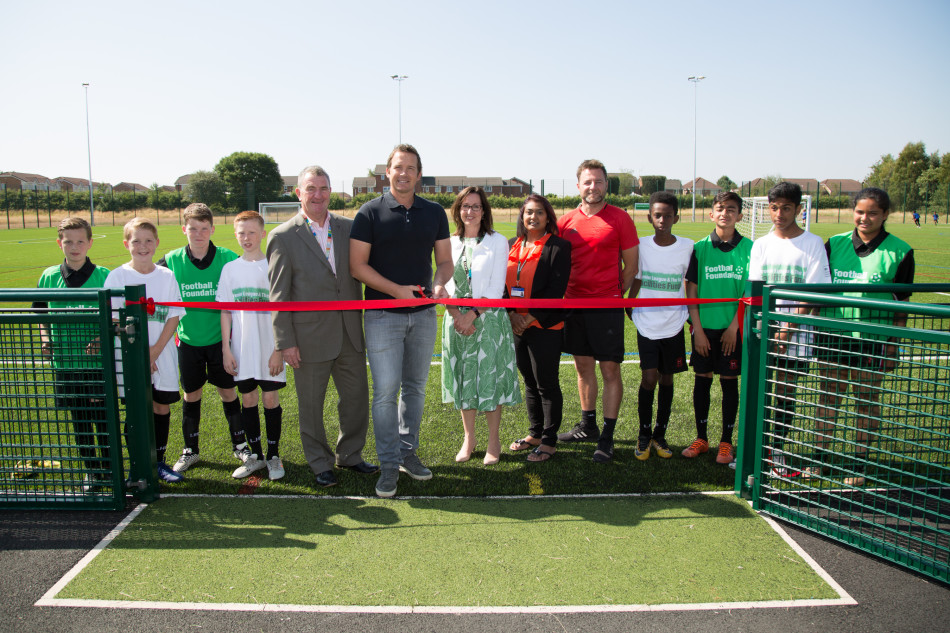 The grant enabled Ladybridge High School to install a new state-of-the-art 3G AGP, replacing a grass pitch that was unsuitable for football due to inadequate drainage and the inability to withstand the harsh weather conditions.

The new pitch has been installed with floodlights, enabling increased capacity and availability of the school's facilities thanks to it being usable during the evening. Not only will pupils at the school benefit from the facility, but also players from Bolton Wanderers Ladies team and local community groups will gain increased sporting programmes.

Bolton Wanderers FC Community Trust also plan to use the site to deliver weekly Premier League Kicks sessions. The school had previously not provided any disabled usage on the site during school time, but will now be able to offer eight hours per week for Ladybridge pupils and another two local schools will benefit with this.

Ladybridge High School were awarded a £143,302 grant from the Premier League & The FA Facilities Fund towards the project. Bolton Council also made an investment of £400,000 from its capital budget. The school worked alongside the Football Foundation and Manchester County FA to compile a five-year Football Development Plan, which is a vision of how sport will be played on-site with an emphasis on increasing participation.

The new pitch is set to enable a growth from 47 to 71 teams in junior and adult formats, with 11 new male and four female Under-15 teams. This will support a predicted increase of nearly 530 players and is expected to result in a 689% increase in football participation in the Over-26 age bracket. This is thanks to the formation of new open-age teams.

Significant growth in the number of female players using the site is also expected, with six new women and girls' teams. This has been identified as a key objective to deliver and is expected to create a 491% increase in participation within that demographic.