Surrey County Cricket Club is sad to announce the death of former Head Groundsman Harry Brind, who passed away over the weekend at the age of 85 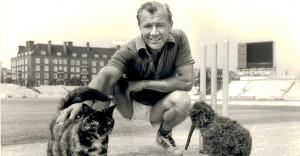 Originally from Hammersmith, Harry was appointed Head Groundsman at the County Ground in Chelmsford before coming to The Oval in the role of Head Groundsman 1975 to 1994, when he was succeeded by his son Paul (pictured with Harry below) - Harry was a popular figure throughout the club who oversaw an era when the ground was known as one of the fastest and bounciest wickets in the world.

Prior to his career in groundsmanship, Harry was a talented young footballer and was part of the Chelsea youth setup.

The club honoured his contribution to the ground by staging a testimonial season in 1993 with figures including the then Prime Minister John Major, John Edrich, Micky Stewart and Graham Gooch writing tributes in the programme.

He won the coveted National Groundsman of the Year Award twice and later in his career was also an inspector of pitches for the TCCB, a forerunner of the modern day ECB.

The Surrey CCC flag flown over the Members' Pavilion will be at half mast today in honour of his incredible contribution to the club. 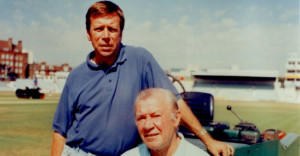 Speaking on Tuesday, Surrey CCC Director of Cricket Alec Stewart said: "Harry produced some of the best pitches I ever played on, with terrific pace and bounce.

"He was one of the most forward thinking groundsmen in the world and relaid the whole square in the late 1970s - allowing the club to produce the best pitches in the world in late 1980s and 1990s. We are very happy that Harry's legacy is being continued with the work of Lee Fortis and his team today."