by External source
in Football, People, and Industry News
on 25 Oct 2015 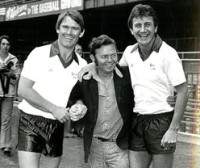 The Baseball Ground may now be long gone, but it will forever hold a very special place in the heart of Bob Smith.

For 16 eventful years between 1967 and 1984, Bob was familiar with every blade of grass, every muddy puddle and every white line on that famous pitch as head groundsman for Derby County.

Bob, 72, who lives in Stretton, joined the ground staff at the home of the Rams in 1967 - the same year that the legendary management duo of Brian Clough and Peter Taylor arrived at the club.

He had started his career 11 years earlier at the CWS nursery in Derby. At the time, it was the largest nursery in the country and had extensive facilities for seed testing and plant trials. As an apprentice, he worked in every department, gaining experience in horticulture, ground care, landscaping and, crucially, sports ground maintenance.

It was this experience which helped him win a job at British Rail's cricket ground where he worked for two years from 1965 to 67 before getting his big move to the Baseball Ground.

It was to prove something of a challenge and not just because the pitch was notoriously difficult to maintain.

He recalls: "When I joined Derby County I was told that I'd never be able to grow grass at the ground.

Read the full article from the Derby telegraph HERE