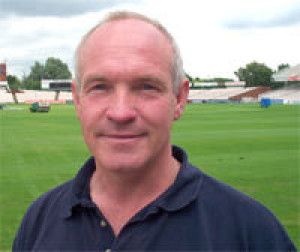 Former England and Lancashire players have led the tributes to former Lancashire County Cricket Club groundsman Peter Marron, who has passed away aged 59.

Marron, who has been hailed a Lancashire legend, was head groundsman at Old Trafford for 25 years, and worked at the club for 30 before leaving in 2008.

He produced some of the best pitches in Test cricket during his career at Lancashire.

Marron passed away this morning due to complications following bowel cancer.

Former England captain and Lancashire all-rounder Andrew Flintoff said on his Twitter account: "The world lost a great man today a @LancsCCC legend and an amazing friend who took me under his wing when I was 16 #RIPPete #thankyou.

"Pete Marron will be missed by everyone xx #RIPPete lots of love to All the family x."

Marron first joined Lancashire's ground staff in 1975 and took over as head groundsman from Chris Hawkins eight years later, only handing over the reins to Matt Merchant in 2008.

"Peter was one of the best groundsmen in the world during his time at Lancashire, no doubt about it," admitted former Red Rose chief executive Jim Cumbes.

"He earned praise from many people, be it players and officials, for producing pitches that had pace and bounce and were renowned across the world. But he did things his own way.

"When the ECB had their policy on the mixtures groundsmen should use, Pete had his own mixture that worked so well."

Legend has it that Marron once joked he was the man who made Shane Warne famous following the Australian leg-spinner's ball of the century at Old Trafford in 1993.

And he once slept under the covers during a Test match as he wanted to keep the covers off the pitch overnight despite the threat of heavy rain.

In 2006, Marron, whose most recent work has involved ground work at Bowdon Cricket Club, was awarded a testimonial by the county as part of Flintoff's benefit year.

"He was not just an excellent groundsman, he was a great friend and supporter of all the players and coaches," said ex-Red Rose captain, coach and cricket director Watkinson, now cricket director at Manchester Grammar School.

"He was part of the fabric of the club for 25 to 30 years, and he went above and beyond his duties as groundsman.

"He put on social events for players when he lived in the house on site. He was one of a small group of people who dedicated the vast majority of their lives to the club.

"Pete was there when I started my career, and he was there until virtually few years until he handed over to Matt Merchant. I will reflect back on many good times spent with him

Read the rest of the article on the following link:-Manchester Evening News