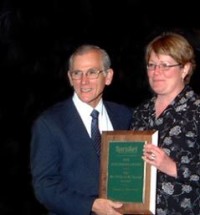 Pam Sherratt has done an outstanding job of representing sports turf managers in the state of Ohio and across the USA since she moved to America five years ago. She has produced many beneficial research papers on sports turf and has initiated many new research "sports turf specific" projects at OSU. She has served as a speaker at sports turf conferences on the national, regional and state levels, and for numerous Ohio state chapter workshops and field days, sharing in-depth technical information in a format that facilitates its practical application in sports turf management.

In addition, she has reached sports turf managers worldwide through the development and implementation of the internet-based Sports Notes as well as working with the OSU Turf Program to develop sports turf specific classes within the curriculum.

Pam started work on a YTS scheme at a pot plant nursery back in 1985 and then went on to do NCH and NDH qualifications at Hutton & Myerscough Colleges. Both her placements were at plant nurseries and Pam initially wanted to go on to be a landscape designer.

A job became available at Myerscough College as a "Horticulture Instructor" in 1990, where she started to do more turf instruction than horticulture and by 1993 was instructing/teaching students full-time in turf under the guidance of Martyn Jones. This started out as teaching students towards their City & Guilds (later NVQ) and then progressed to program manager of NCGG, and NDT by 1999. While Pam was working at Myerscough she completed her BSc (Hons) degree, part-time at the University of Central Lancashire.

While at Myerscough Pam had the privilege of working with Martyn Jones, Jay Dobson and Dave Rhodes and it was Dave that really got her more interested in the Sports Turf side, rather than golf. Between them they conducted a lot of stadium visits and tours and by 1999 Pam was organising all the student placements & conducting study tours. She did work for a summer at Turnberry Golf Club with George Brown, a man for whom she holds in high esteem, but her main interest has always been more in sports.
Pam first travelled to OSU in 1998 when Martyn Jones and Karl Danneberger organised a summer job for her at the OSU Turfgrass Research Facility. Pam loved it so much that she decided to move to Ohio in 1999. She worked as a Research Associate for Dr. John Street (1999-2001) - with the research emphasis on sand-based field stability, research that Pam based her MSc. project on, particularly fertility, plant growth regulators, weed control and, more recently, establishment and wear tolerance of athletic field grasses. This year there is more research on artificial "Infill" systems.(Picture right: Turf Team - this is OSU's turf group of faculty, staff and graduate students taken last summer at an OSU research field day). 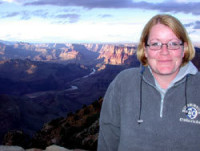 Pam and her husband Craig (former Lancastrian), have a house near the OSU campus, which they share with their dog and 2 cats. Pam said, "I've travelled a lot since I've been here, so I have got to see some wonderful things, but I do get homesick sometimes. With a little bit of effort, I can get hold of most things that I miss from the UK (except pickled onion monster munch!!), and we do have "BBC America", so I can keep up to date with all things English. I'm looking forward to coming home sometime this year as I hope to get to the Southport NTF Conference in November and catch up with friends & family."(Picture left: Pam at the south rim of the Grand Canyon - one of the perks of living in the US of A!)

This Award recognizes Pam Sherratt's ongoing contributions to the professional body of knowledge and the development of sports turf management practices that fit the needs of athletes within the parameters of today's multi-use facilities.