0 Former pitch of the year put to good use

Former pitch of the year put to good use

As we are now well underway in the new season at our new home, I was lucky enough to go 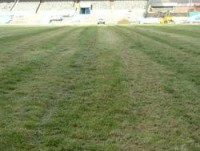 After the initial 3-4 inches was removed it became clear that the soil was of poor quality, perhaps typical of a pitch that hadn't had any major work done to it for around thirty years. 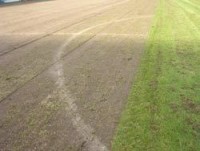 It was a fascinating insight into the pitch, being able to see the layers stripped off. Up until this time we had only been able to guess at the sort of work that had gone on in previous years. It was now possible to see evidence of sand and gravel banding, drainage lines and even the drill and fill work that was completed 18 months ago.

Eventually the pitch was taken down to the 8 inches as planned, exposing bricks, glass and another nasty problem all too familiar to us over the years-black layer! The constant use of the undersoil heating over the years had combined with the clay soil to create a crust around the pipes. This has obviously impeded drainage for many years. This was coupled by the uneven laying of the pipes, which had limited the depth of our aeration operations. 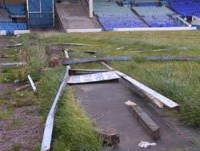 Although we had got quite daring last year by going to a depth of 8 inches (200mm) with the drill n fill exercise, there was evidence that vertidraining was carried out to around 10 inches (250mm) historically.

The excavation work carried out by the contractor has been a good way of recycling the resources that would otherwise be covered with rubble in the next few months once the demolition of the stadium gets underway. Even the rugby post sockets, not used for 7 years were salvaged.

As for the stadium, that will soon be demolished to make way for housing and other retail and leisure developments which will take between 3-5 years to complete. Judging by the state of the ground at the moment, the demolition teams need to be in quick, as it is more likely to fall down first. 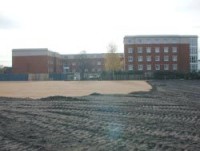 A geotechnical report, commissioned by the Client, showed contaminated soils in the existing playing field (a grass running track and infield ), and the Mallinsons brief was to construct a new playing surface on top of the existing (approx. 12000m²), to allow a construction profile build-up of 500mm. Mallinsons were also asked to incorporate into the construction, any material that could be salvaged from Maine Road, before the demolition gangs moved in to remove all traces of the previous occupants, Manchester City F.C. Work commenced on the Ducie school site on the 12th September 2003, and almost immediately it was discovered whilst putting in drainage, that underneath the existing playing field, was a complete road system and remnants of a terraced street, including large stone paving flags and Lancashire cobbles. Not easy to contend with and certainly not good for the construction equipment. However the work progressed and by the time the topsoil was ready to be imported from Maine Road, the grass at the stadium had grown a further foot long, before excavating could take place, the field needed baling!

After cutting the grass, the remaining sward was removed with the Koro Field Topmaker. Then started the gathering of the material with 360º excavators and dumpers. Approximately 140 lorry trips were required to move the topsoil to Ducie High School, and this was managed in a matter of three days.

The weather was kind over the majority of the working period, but it has recently curtailed the operation.

However it is hoped to complete the spreading and levelling of the final layer before the Christmas break, with the cultivation, preparation and seeding down at the appropriate time.