by Charmian Robinson
in Industry News
on 05 Jun 2009

The upsurge in demand for improved sports pitches since the late 1970s has played a crucial part in the current success of AFT Trenchers, who are now the leading manufacturer of specialist attachment trenching equipment worldwide. 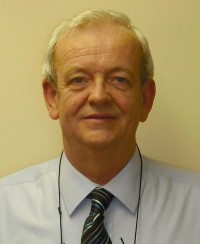 Previously known as Atkins Fulford, AFT Trenchers has been in existence for over fifty years and began life rebuilding car and vehicle engines. It wasn't until the late 1960s that the first actual trencher was produced. It was a 'self-propelled' model, the first of its kind, developed for Anglia Water and subsequently ordered by National Water Authorities across the UK. This led to the setting up of AFT Trenchers in its own right.

One of the first machines was the WizzWheel 55 which included a conveyor system to remove the spoil. It has proved so successful that, although modernised, the principle of operation remains the same and the AFT 55 is still in production today.

The true potential of the company emerged when a niche in the agricultural industry was identified leading to the design and build of the AFT 65. Unique because it had built-in drive to move the tractor which, in those days, was not available with creeper gearboxes. It was such a major advancement that it won several Gold and Silver trade product awards.

The subsequent introduction of creep gear, which is now available on most modern day tractors, has since reduced demand, but not before the AFT 65 had made a serious impact on trenching capabilities.

When Harry Jurgens was asked to take over as Managing Director of AFT Trenchers in 1996, he had had little hands-on experience but drew on his entrepreneurial skills and degree in fiscal law which had given him success in several of his own companies. He was, effectively, head hunted whilst working as a consultant following the sale of his business in Holland.

The owners at the time were looking to retire and wanted to pass the company to someone who was forward thinking and could breathe new life and direction into it, and Harry seemed to tick all the right boxes.

Immediately on joining the company, Harry recognised the need to increase profitability. The solution was to improve out-dated production systems by transferring many of the processes from in-house to sub-contracting.

Harry has since purchased the company and moved it to new, modern premises with advanced assembly and paint shop facilities. This process also laid the foundations for developing a totally new machine which would be targeted at the individual groundsman or greenkeeper.

"The idea was to produce a trencher which would enable every individual sports facility manager, groundsman and greenkeeper to have an affordable method of implementing their own small scale drainage and irrigation programmes" said Harry.

"With the right piece of kit, they would be able to tackle problem areas, small scale new developments and general drainage maintenance issues themselves without the need for an outside contractor."

The result was the AFT 45, introduced at Saltex '98 and an immediate success. For the first time there was an affordable trencher that could be sold in high volume to a large 'end user' market. The AFT 45 is now the most successful trencher in the company's stable. 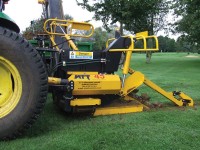 Harry's other strength is in languages, speaking five fluently and understanding the basics of many more. He used this advantage to travel extensively and push ahead with the expansion into exports.

"I saw the future of AFT Trenchers primarily in the consolidation of sales in the UK and the rapid expansion of foreign markets"explained Harry. "We can now boast that exports account for 60% of our production. We have strengthened our position by looking at developing countries, such as Algeria, where we recently won one of our largest contracts to supply all the agricultural and sports industry training schools with AFT 45's."

"We have also secured substantial contracts in Russia, Georgia and the Ukraine and have agents all over Europe, as well as in many other countries worldwide operating on our behalf. Japan in particular is developing sports pitches on a large scale and, of course, China is a vast untapped market for the future."

The sports industry, quite rightly, continues to demand high standards of performance from its facilities indoor and out. The challenge for companies like AFT Trenchers is to maintain a strong profitable business that enables it to invest in new ideas, new methods and constantly look for ways to assist the industry it serves, to achieve the best.