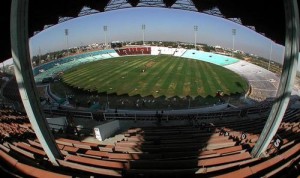 The foundation stone has been laid for the "world's biggest cricket stadium" in the city of Ahmedabad, India.

The unnamed ground and its surrounding landscape will reportedly cover an area of 63 acres in the Montera locality, with the city's previous cricketing venue - the 49,000-capacity Sardar Patel Gujarat Stadium - razed to make way.

Sports architects Populous are overseeing the project. The firm previously designed Melbourne Cricket Ground - currently the world's largest - and they are behind the redevelopment of the iconic Lord's Cricket Ground in London.

Design details and visualisations of the Ahmedabad stadium are expected to be unveiled later this month. According to several media reports in India, the facility will have capacity for 110,000 spectators and will include 76 corporate boxes, four dressing rooms, three practice grounds, a club house, an indoor cricket academy and an Olympic-size swimming pool.

The Gujarat Cricket Association, which made the "world's largest" claim for the project, has reportedly estimated the overall cost at seven billion rupees (US$102.6m, €96.3m, £83.3m), and believe the stadium will take two years to build.

When finished, it is expected to host matches involving Indian Premier League Twenty20 side the Gujarat Lions, as well as international fixtures.

Image: The 49,000-capacity Sardar Patel Gujarat Stadium has been demolished to make way for the new ground / Rebecca Naden/PA Images