by Tony Hawkins
in Machinery & Mechanics, Industry News, and Football
on 03 Feb 2016 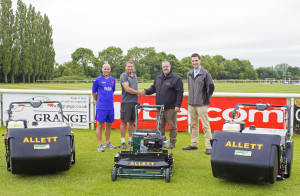 Estates Manager and Head Groundsman of league two Exeter City FC, Clive Pring, has been with the club for about nine years. Until recently the mowing and pitch cleaning regime at St. James Park was done solely with ride-on mowers.

Looking to improve the soil-based pitch, Clive and his team of three spent a considerable amount of time trying various walk-behind mowers to achieve that end and making sure they made the right choice of mower to suit the surface.

They arrived at the Allett Regal 36 which they found perfect for tight turning. Regarded by groundsmen around the world as the ultimate large-area single cylinder mower, power steering with independent braking on the Regal 36 provides the exceptional control and turning ability, while hydrostatic forward and reverse drive gives infinitely-variable mowing speeds and cuts per metre.

"We took delivery of two Allett Regal 36 mowers from our local dealer Mason Kings in July 2015," says Clive, "and they have been ideal for the work. We also learned that the new Allett RM34 Stadium Rotary Mower was coming into production and naturally, being pleased with the performance of the two Regal mowers, we wanted to see what the RM34 could do for us." Exeter started with one Allett RM34 and found it extremely versatile, superior in the clean-up as well as being used as a match preparation mower, with the extra width saving a great deal of time. So impressed was the club with the RM34 they ordered another and now the clean-up takes as little as three quarters of an hour without stretching the groundcare team.

"The cost is small for pieces of kit that take us to another level," adds Clive, "the Allett mowers put us up there with the Premier league in terms of caring for the turf, but I think these mowers can be used even further down the club pyramid to create and maintain better playing surfaces."