0 Four major stadium contracts for SIS in Europe and Ukraine

Two famous stadiums, Real Madrid's Berabeau and the Parken Stadium in Copenhagen, will be returfed by SIS in July. 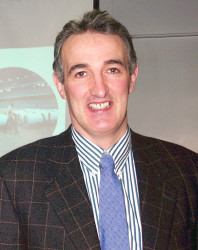 SIS has also won the contracts for full construction of the pitches at the KB Hallen training complex in Copenhagen and the new Shaktar Donetsk stadium, a five-star venue currently under construction in the Ukraine.

Says SIS chief executive officer George Mullan, from Sligo in Ireland: "We are delighted to be building on our reputation as Europe's leading football pitch constructors.

"These contracts mark a dramatic turn of events for us as we consolidate our achievements across the UK and Europe. The Moscow resurfacing for the UEFA Champions League final proved that we can move quickly with our team to work on pitches around the world.

"I am very proud that a company based in Britain, Ireland and the Netherlands is flying flags in major sporting arenas around the globe."

The Copenhagen Parken Stadium will be returfed with a new 40mm surface to European standards.

Copenhagen KB Hallen's stadium will be a complete build of the SIS Xtragrass system (a blend of artificial turf with natural grass grown into a traditional rootzone) and will include drainage and undersoil heating.

The Real Madrid pitch will be returfed, involving the existing pitch being removed and new turf installed for a 40mm new top surface.

At the Shaktar Donetsk Stadium (Ukraine) a five star UEFA pitch will be constructed for the final of Euro 2012, including a Sub-Air system, undersoil heating, automatic irrigation and full drainage.

The pitch works will be split in two, with the pitch built to turf level in 2008 and the pitch surface turfed in April 2009. The whole project is scheduled to take 14 weeks and the design stage will be completed next month (July).

"These four are all major projects," says George Mullan. "Our reputation for pitch building around the world has gone before us and we are delighted that top stadiums are taking advantage of our expertise." 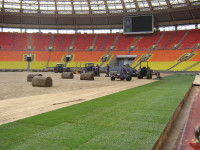 Sports surfaces by SIS include natural grass and synthetic turf (which the company manufactures in Cumbria) and the company is also the official distributor of Team Sports products in Europe, including FIFA-approved products.

Natural turf is grown by SIS specifically to order for individual pitches and sports stadiums on farms in the UK, Portugal and Germany.