Put yourself in the shoes of DW Stadium Head Groundsman, Ian Forshaw. As soon as the Wigan Athletics Football Club Premiership season ended in May 2012 he had to plan for high profile Wigan Warrior Rugby League matches, all of which had a strong TV following with audiences in the southern hemisphere. This meant his efforts were seen and judged by increasingly critical commentators and spectators around the globe.

So he faced a challenge to bring winter worn playing surfaces up to exacting summer league rugby standards, in around a month. The solution? A bit of background first. Up until this season, re-turfing the pitch every other year andoverseeding in the interim, had been the routine. But Ian Forshaw suggests this approach was not necessarily delivering the results demanded, the 'safety' of a re-turf and overseed regime perhaps having got him into a rut.

"We decided to adopt a different approach for this season as we know the playing surface has not been as good as we wanted over the past couple of years," he says. "So we decided it was time for another approach. On the 16th May we deep frased the old surface completely down to the rootzone and imported 100 tonnes of coarse sand to improve drainage. The stadium is built on an old marsh so drainage, and methane gas, are persistent problems." 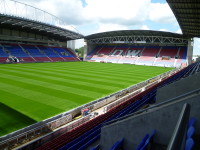 The next job was to re-seed with a Johnsons J Premier Pitch grass mix. This was carried out on the 16th May with four crisscross passes with a slit seeder followed by a final pass with a dimple seeder. By the 24th May, the fruits of this labour were seen, with strong germination across the pitch.

"We were spot on with the grass seed ratios," adds Mr Forshaw. "I could see individual plants developing and building up. If we had put in too much seed we would possibly have run into problems with fungal disease, but we had to also ensure we would get exactly the right coverage to cope with play in just four weeks."

The fast developing sward was mown to a height of 75mm with a rotary mower, with prophylactic fungicide applications to counter the mild but wet growing period. Progress was closely monitored, with high profile matches booked at the stadium for the 25th and 29th June.

"The first game on that Monday evening was going to be a stern test of the newly seeded pitch but it stood up really well," says Mr Forshaw. "Of equal importance, the grass looked good for a game on the following Friday. We continue to check for leaf spot as this had played havoc with previous grass mixtures we have used, but it has not been a problem with the Premier Pitch mixture. Overall, we are really pleased."