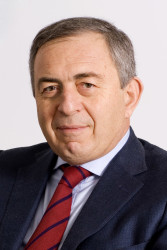 Franco Fusignani assumed his new role effective September 20, 2010 and will retain his current role as CEO of CNH International SA.

Franco brings with him extensive international experience and an impressive record of results. After joining the Fiat Group in 1970 as an engineer, he held a variety of positions within the industrial and business activities of the Group.

In 1978, Franco took the lead of the Fiat diesel operations - trucks, buses and engines - in Latin America. In 1981, he established the new Fiat Diesel Engine Division in Europe. In 1986, Franco was appointed Vice President of the Industrial Construction Equipment operations. In 1992 he was assigned responsibility for the European Agricultural Commercial operations and in 1996 he took the lead of the International Agricultural business establishing new industrial presence in Poland, Turkey, India, China and Mexico and strengthening the commercial presence in Africa, the Middle East, CIS and Asia.